Winning the World Cup is every cricketer’s dream. The tournament is the most awaited one, and all countries are continuously working towards winning the Cup. That being said, captaining a team to a World Cup win is an even more prestigious honor. Over the years, many have won the tournament and provided the world with some iconic moments. Let’s take a look at the 5 youngest captains to ever lift the World Cup.

Kapil Dev is one of the most successful cricketers India has ever seen. The talented all-rounder led his team to World Cup glory in 1983 at a young age of 24 years 170  days. That’s a stupendous achievement for someone that young. To put that into perspective, Virat Kohli has already crossed the 30-year mark. India’s World Cup win was an unlikely one, and has been celebrated time and again. Kapil Dev is the youngest one in this list.

“Dhoni finishes off in style!” Ravi Shastri’s iconic commentary call will give you goosebumps even today. MS Dhoni fulfilled a billion people’s wishes when he dispatched the ball  over the bowler to win the World Cup final. He had already cemented his legacy as one of the best captains in the world, but turned his legacy into a legend at the age of 29 years 268 days. Dhoni has since winded down his career, but this moment will be remembered forever in the hearts of Indian cricket fans. Ricky Ponting has won a mind-blowing 2 World Cups as a captain, and has already cemented himself as one of the most successful captains ever. He was just 28 years old when he won his fisrt World Cup as a captain. Ponting was a prolific batsman in his prime, and his pull-shot was so great that it has since then been associated with the talented batsman. Clive Lloyd captained one of the strongest cricketing sides in the world. He is thus one of the most successful Test captains of all time. He captained the team in 3 successive World Cups, winning two of them and losing in 1983 to India in the finals. That is an outstanding record for any captain. He won his first World Cup when he was almost 31 years of age. 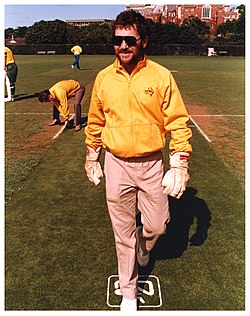 Allan Border one of the best left-handed batsmen in the world. He had registered countless of batting records, and was one of the inaugural 55 inductees in the ICC Hall of Fame. He became a captain reluctantly, but was the one who lead the team to World Cup glory in 1987 at the age of 32 years 104 days. Border is now a commentator, and has long retired from active cricket.