You can’t play percentage cricket all the time to build long partnerships in white ball games, unlike Test cricket where you can do that because time is generally not a huge factor there.

There has been only one Indian batting pair which has stitched two 200-run partnerships in ODI cricket so far and that pair is none other than that of Gautam Gambhir and the current Indian captain Virat Kohli.

It was the 4th game of the ODI series between India and Sri Lanka in 2009. Sri Lanka batted first and posted a huge score of 315 runs on the board with Upul Tharanga scoring a century opening the batting and Kumar Sangakkara scoring 60 batting at no. 4.

Gambhir didn’t open the batting during India’s reply as India’s first choice openers Sachin Tendulkar and Virender Sehwag were playing in that game.

Gambhir and Kohli batted at no. 3 and no. 4 respectively and with a 224-run partnership for the 3rd wicket, the pair put India in a dominating position.

Kohli’s hundred in that game was the first ever hundred of his ODI career. Gambhir remained not out at the score of 150 which was his highest score in One Day Internationals. India won that game by 7 wickets. 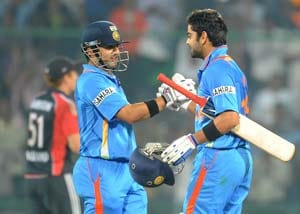 England toured India towards the end of 2011 for a limited-over series and the pair of Gambhir and Kohli dragged India over the line once again in one of the games of that series which was played at Feroz Shah Kotla Ground, New Delhi.

Gambhir and Kohli batted at no. 3 and no. 4 respectively in that game as well, despite the fact that Sachin Tendulkar and Virender Sehwag were not playing. Parthiv Patel and Ajinkya Rahane opened the batting for India and couldn’t do much at the top of the order.

India were chasing a target of 238 runs and although it was a modest target, two early wickets had put India under a little bit of pressure.

However, the men in blues didn’t lose any more wickets after that as an unbeaten partnership of 209 runs between Gambhir and Kohli for the 3rd wicket saw India through.

Kohli remained unbeaten on 112; while Gambhir scored 84 not out.