After an explosion of two back to back super-overs in the weekend, Indian Premier League returned to a lackadaisical affair in the beginning of the week. Chennai was humbled by Rajasthan Royals in a lopsided encounter that was not savoured by the audience in its fullest glory.

Chennai was in early jeopardy as their best bet with the bat departed in no time. Jos Buttler plucked an absolute ripper mid-air in the covers as Du Plessis walked back to the pavilion for 10 runs. Shane Watson was the next to follow suit as an attempted drive in the leg side against Kartik Tyagi went straight down the throat of Rahul Tewatia.

Sam Curran and Ambati Rayudu showed minimal resistance but that too fizzled in quick succession as Shreyas Gopal scalped Curran while Rayudu was removed by Tewatia with Samson taking a simple take. MS Dhoni and Ravindra Jadeja batted for a fair bit to take Chennai to a respectable total before the former Indian captain found himself short of the crease while Archer rattled the timbre. Chennai could only manage 125 from their quota of 20 overs.

Rajasthan found themselves in high waters early in the innings as Ben Stokes pulled off an outside delivery from Deepak Chahar into his stumps. Robin Uthappa got out for 4 runs as Dhoni took a decent catch in the bowling of Josh Hazlewood.

Sanju Samson once again failed to drum up something fine as he got out for a duck trying taking on Deepak Chahar. With Rajasthan Royals wobbling precariously at 28 for 3, two of their foreign signings, Jos Buttler and skipper Steven Smith started weathering the early storms and then retaliated strongly to blow away the Chennai bowlers out of proportions. Buttler led the charge with an incredible 70 from 48 balls that saw him hammering 7 fours and 2 sixes. Smith played the perfect anchor to the knock, stitching 26 runs from 34 balls, sealing the fate of the tie. 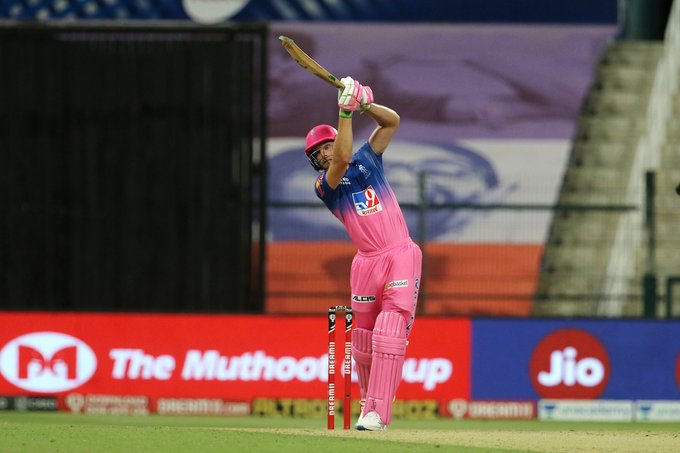 Twitter opened up with delight and melancholy after Chennai was outdone single-handedly by English keeper, Jos Buttler.

Jos Buttler few months ago said that MS Dhoni has always been a big idol of him and today he gets MS' t-shirt, what a day for Jos even with the bat. pic.twitter.com/qWGPVJKnxM

One of the most underrated match winner of this generation 🐐🐐#CSKvsRR pic.twitter.com/PYcA7qRGGa

Jos the Boss!@josbuttler is awarded Man of the Match award for his match-winning knock of 70*#Dream11IPL pic.twitter.com/cw915oSrP8