The fierce rivalry between India and Australia has led to many famous games of cricket, especially in ODI cricket. However, some individuals have been able to stand out with breathtaking performances that will be forever etched in the memories of cricket fans. Here are the top 5 highest individual scores by a batsman in India versus Australia ODIs. India and Australia played the decider of a seven-match ODI series at Bengaluru with the series tied at 2-2. India batted first and decided to put the runs on the board. Both openers Shikhar Dhawan and Rohit Sharma began to hit boundaries and made use of ideal batting conditions. After Dhawan departed for 60 and a misunderstanding between Rohit and Virat Kohli saw the latter getting run-out for a duck, the onus was on Rohit to perform.

Suddenly changing gears, the stylish opener began to smash the Australian bowlers to all parts of the ground and displayed an astonishing array of shots, making life difficult for the bowlers. Smashing 12 fours and 16 sixes, Rohit Sharma scored a double-hundred and became only the third player at that point in ODI history to do so. India scored a staggering 383-6 in their 50 overs, which was too much in the end for the Aussies as they felt short by 57 runs. 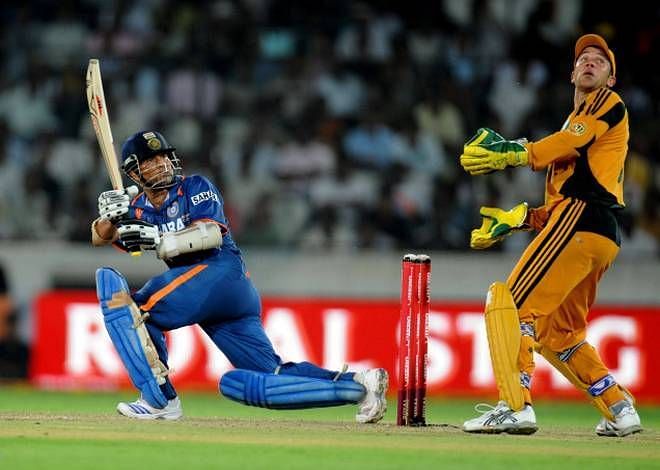 Australia batted first and smashed 350-4 in their 50 overs, thanks to a brilliant hundred from Shaun Marsh. Needing 351 runs to win, India needed a good start from their openers. However, they lost wickets at regular intervals and kept on falling behind in the chase. This is when Sachin Tendulkar took the responsibility of taking the team home upon him.

Tendulkar started playing his shots and took calculative risks, finding the gaps regularly. Suresh Raina accompanied him and scored a well-made half-century. Tendulkar scored 175 runs in 141 balls including 19 fours and 4 sixes. India were in the driver’s seat till Tendulkar was at the crease. But after he departed for 175, so did India’s hopes of winning the game as they lost by just 3 runs. Although this was a heartbreaking loss, Tendulkar’s innings was acknowledged by many as one of the finest in ODI cricket at that point.

It was the first ODI between India and Australia in 2016 ODI series at Perth. India batted first and wanted to put the scoreboard pressure on the Aussies. After losing Shikhar Dhawan early, both Virat Kohli and Rohit Sharma began to stamp their authority on the game and began taking the Australian bowlers to the cleaners. The duo added 207 runs for the second wicket and while Kohli got dismissed on 91, Rohit went on to score a big hundred.

Smashing the bowlers all over the park, Rohit Sharma scored 171 runs off just 163 balls including 13 fours and 7 sixes. This helped India post 309-3 in their 50 overs. Although India ended up losing that game, Rohit Sharma’s score still remains the highest score by an Indian against Australia on their own soil in ODIs.

Australia batted first and lost two quick wickets. But Shane Watson and George Bailey strung together a brilliant partnership with both scoring hundreds to help Australia reach a brilliant score of 350-6. While Shane Watson scored 112, Bailey smashed 156 runs which included 13 fours and 6 sixes.

His innings was brilliant but it went in vain as a brilliant century from Virat Kohli in the second innings ensured that India chased down the target rather comfortably with six wickets in hand. Rohit Sharma’s brilliant 171* helped India post 309 runs in their 50 overs. Needing 310 runs to win, Australia did not get to the best of starts as they lost two wickets quickly. However, Steve Smith strung together a partnership of a massive 242 runs with George Bailey and smashed a brilliant 149 runs which included 11 fours and 2 sixes.

George Bailey also himself went on to score a hundred as Australia ended up chasing down the target and winning the game comfortably by five wickets.

Mohammad Hafeez Slammed Rameez Raja For Insulting Him With His Statements