A loss of a loved one can be a tragic moment for anyone. Copying with the loss can be one deeply saddening experience. Emotions take over as one tends to lose out on normalcy.

It becomes even more painful when you couldn’t even be there when your loved one is being laid to rest. Cricketers in India have often been at the receiving end of such painful experiences.

Playing cricket isn’t just a job in India. You have to make a lot of sacrifices to live the dream that you and your family dreamt of. Sometimes, it can be so cruel that you couldn’t even say goodbye to your loved one who has breathed his last.

There have been quite a few instances when the cricketers despite losing their loved ones did not run away and played the cricket game and stayed true to their job.

Here’s a look at all 5 players who played the game despite losing their loved ones: There have been a couple of tragic incidents happened amidst the ongoing IPL2020. A few days back, Kings XI Punjab batsman, Mandeep Singh lost his father. However, with him currently in UAE and given all the Covid-19 guidelines that have been laid out, he could not go home and attend the funeral.

He instead played the next two games against SRH and Kolkata Knight Riders. He even played a match-winning 66-run knock against KKR and thereby helped his side reach the playoffs.

Just like Mandeep Sharma, a similar fate happened with Nitish Rana as well. A day before he hit the ground running against Delhi Capitals, he was shocked to hear about the demise of his father-in-law. Sadly he could not be with his wife and other family members to extend support.

He scored a crucial half-century the next day against Delhi and took his team over the line. Upon reaching his half-century, Rana held afloat a shirt in his father-in- law’s memory. The shirt bore the name of his father in law- Surinder Marwah. The journey to success has never been easy for Indian skipper, Virat Kohli. During his road to success, he has faced a lot of atrocities but none bigger than his father’s demise at a time when he was trying to make himself known in the cricketing world.

Virat Kohli was a playing Ranji game for Delhi when he came to know that his father was no more. It left him completely devastated. He had the choice of leaving his team and staying with his family or completing the four-day Ranji game. He chose the latter.

Despite many believing he wouldn’t turn up for the rest of the match, the then 18-year-old came to the ground the next day and score 90 runs. His heroic knock helped his team Delhi to avoid a follow-on. 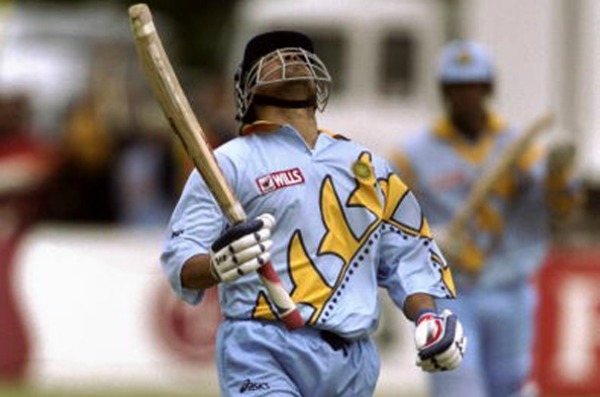 Master Blaster, Sachin Tendulkar too, unfortunately, also found himself at the receiving end of such a traumatising incident.

During the 1999 World Cup, the whole nation was left shocked as Sachin lost his father, Ramesh Tendulkar. By his own admission, it was the most difficult stage of Sachin Tendulkar’s life. He went back home from England, attended the funeral and came back to play the game against Kenya. He hit a stellar century and helped his team register an important win.

Rashid Khan was playing in Big Bash League in Australia when he came to know about his father’s demise. It came as a huge shock to the spinner, but he stayed true to his profession and played the next game against Brisbane Heat.

“It was tough. I lost my Dad, the one who is very close to us and to my family. He really supported us – he struggled a lot while giving up (a lot) with how he (raised) us. He was always watching my games, he didn’t understand cricket a lot, but he just was always asking my family how I had done,” Rashid Khan said in an interview after his father’s demise.