Have you ever saw a lion in the eye standing in its own den? Have you ever walked straight at the face of a gaping lion, famished for weeks? Have you ever dared to exchange roars against the king of the jungle? It all sounds a bit a fancy, but that is exactly what will unfold when India will cross swords with Australia in the latter’s den.

In a new normal where the stadiums will turn into desolate heaths, clad in gigantic covers, the pathways to the ground will seem like dark alleyways where the crickets will sound louder than the cricketing extravaganza that will unspool acres ahead, the world will come to a standstill as old enemies, India and Australia will lock horns.

Despite the mellow down of the Australian cricketers from what they used to be in the early days if one attribute of the sport that hasn’t really changed is sledging.

A verbal war which is waged between the best of cricketers in order to creep beneath the skin of their counterparts, expanding the battle on the field to another spectrum, Australians have a long legacy of using the sledge as an emphatic weapon against others.

Especially, India has a prolonged history with the Aussies when it comes to the war of words against each other. Not only have they responded in the doughtiest ways but a few of them were successful in even silencing the fellow Yellow people.

We will look at a few iconic moments of sledge-wars which can very well be termed as the sledge-hammer between India and Australia.

1. Ravi Shastri handed Mike Whitney the most valuable lesson of his cricketing career

Usually, it is the eleven players of a team that tends to get brash against the opposition.

In this case, however, Mike Whitney, who was fielding as a substitute tried to intimidate Shastri with a truculent approach.

While Shastri smote a ball at Whitney and mulled overtaking a single, the Australian collected the ball and hollered at the current Indian preceptor, citing, “Stay in your crease or I’ll break your fucking head”.

Ravi Shastri retorted in the most stunning ways as he cited, “If you could bowl as well as you talk, you wouldn’t be the fucking 12th man!”.

Not only did Shastri craft strong counterblast but he blasted a phenomenal double-century in the same game to silence Whitney once and for all. Ideally, Symonds got on Harbhajan’s nerves in Adelaide, where the Indians crafted a remarkable victory in 2003-04 Border Gavaskar Trophy. This incident, however, unfolded in 2008.

After the end of an over, Harbhajan told Symonds, “Teri maa ki”, ideally, which is a Hindi slang, addressing his mum.

Now Symonds was such a combative mood, that he thought that Bhajji has summed up his facial appearance and according the Turbanator, he looked like a monkey.

Apparently, Hayden corroborated the fact and Harbhajan was handed a three-Test-match ban. However, the Indian authorities staged a strong fightback and overturned the decision.

However, that was for the first time sledging was taken to the court where the Australians were later proven to be wrong. Let’s take that as a victory.

3. Virat Kohli kissed a man and he loved it

Till then Kohli was not hitched to Anushka Sharma, the latter was his girlfriend and used to attend almost every game of him. It was like a religious practice from Kohli to wave kisses to Anushka after playing a good knock.

However, at Perth, someone else shared Kohli’s love and it was not Anushka. It all happened when Kohli was on a quest to prove his supremacy as a batsman with the captaincy on his shoulders. Despite India bowing out in meek submission to the might of the Australian bowlers, Kohli took a stand at one end and started belting out a few classic strokes.

As he defended a delivery of Mitchell Johnson, that rolled back right at the feet of the dreaded fast bowler, he picked up the ball and hurled it at the stumps, which smote the back of a retreating Kohli. This irked the Indian skipper and what followed thereafter was sheer carnage.

Upon reaching his 9th century, Kohly waved kisses at his girlfriend, Anushka who returned him the affection. This is when Anushka had a competitor as Kohli waved his bat and blew a couple of kisses to Mitchell Johnson.

This was not the end of the war between the Indian run-machine and the Australian express train as Kohli continued with the carnage that saw him slicing a volley of boundaries against Johnson. Unfortunately, Johnson had the last laugh as he scalped the Indian skipper on the last ball of the day after a well-constructed 169. However, that one good ball doesn’t take away the craftsmanship that was up for grabs. Tim Paine threw down a gauntlet at Pant’s feet and Pant returned a double. This transpired in the 2018-19 series between India and Australia when the budding southpaw came out to bat. Tim Paine was heard quoting, “Tell you what big MS is back in the one-day squad. Should get this bloke down to Hurricanes.​​ They need a batter. Fancy that extend your Aussie holiday, beautiful town Hobart too… get him a waterfront apartment.”

He also continued, “Have him over for dinner. Do you babysit? I can take my wife to the movies while you watch the kids.”

Pant was swift with his response when Tim Paine came out to bat with Australia enmeshed in a precarious position. Pant retorted, “”We have got a special guest here. Have you heard the word temporary captain ever? You [Jadeja] don’t need anything to get him out. Come on lads.”

He continued, “He loves to talk, that’s the only thing he can do. Only talking talking,” Pant sledged from behind the stumps. After the end of the over, on-field umpire Ian Gould had a word with Pant and was seen explaining him something.”

However, both the cricketers gelled well after the series and Pant did pay Paine a visit and shared a snap with his wife and his kids.

It was the first match of the ODI series between India and Australia in 2004 at Melbourne. The Australian batters posted a decent show as Symonds and Clarke stitched together a brilliant partnership while Agarkar razed through the Australian batting line-up.

India was off to a decent start when Sehwag ad Sachin started attacking the Australian bowlers, however, they soon came a cropper when both Sachin and Sehwag was removed in quick succession. This was when Ganguly walked out in the middle. While trying to weather the initial storm, he let one of Symonds’ balls fly to Gilly. The Australian all-rounder decided to give Ganguly a piece of his mind censuring him for missing out on deliveries. This witnessed the Indian captain slashing wildly at a ball from Symonds which even left the commentators flabbergasted.

However, that wild swing slowly turned into an onslaught of the Australian bowlers as he started pummeling left and right, irrespective of the fact that who was at the other end. Unfortunately, for the Indians, Ganguly fell short of the crease when Harvey dislodged the bails with a theatrical flourish and that also interred the Indian hopes six feet under.

He fell for a phenomenal 82 from 83 deliveries that saw him clubbing 6 boundaries and 1 six against the collective might of the Australians. That taught Symonds a good lesson of never opening his mouth against Ganguly again.

6.Virat Kohli waved away James Faulkner like a pushover in the gallery 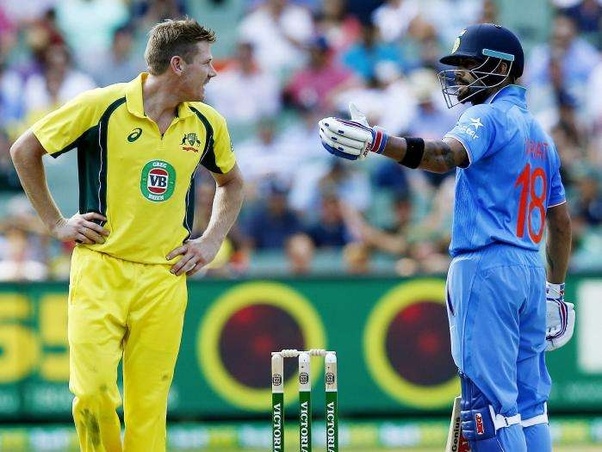 It was at MCG once again that Australian fast bowler, James Faulkner wanted to get under the skin of Virat Kohli. It was when Kohli took a single to move to the non-striker’s end on 73 runs in the third ODI of India and Australia.

Faulkner’s initial salvo with words was targeted at Kohli, trying to fluster him a bit. However, Kohli retaliated in the sweetest ways possible as his response was, “You’re wasting your energy. There’s no point. I’ve smashed you enough in my life. Just go and bowl.”

Kohli then continued with his carnage with the bat as he smacked a 117-run innings before John Hastings removed him. However, the match ended against India’s favour as Australia walked away with the bragging rights, courtesy of a sensational batting performance.

One of the most gentle and amicable Indian cricketers ever, in the antiquity of the Indian team was Javagal Srinath, a towering fast bowler, who is surmised to have bowled the fastest ball by an Indian as per the records of Alistair Campbell.

In the 1999-2000 tour of Australia, Srinath rattled Ponting in the first innings with an absolute screamer. This left Punter riled to the core and he decided to avenge his derogatory dismissal in the second innings. Unfortunately, Srinath was up to the task and retaliated with sweet chin music that smashed the face of Ponting.

Despite the fact that Srinath went up to Punter to extend a hand of apology the Aussie stalwart turned him down and asked him to bowl. The scene has always been an opposite one where Indian batsmen have been spooked by the formidable pace of the Australian fast bowlers. It was an ecstatic spectacle when Srinath provided Punter with a taste of their medicine. Ponting hasn’t been tortured ever in his cricket career like the way Ishant ripped through him with a fiery spell. Chasing a mammoth 435, Australia was wobbling at 90 for 2 when India’s beanpole started hammering Punter.

The first ball beat Ponting by the pace and the late swing took him completely off guard. A loud LBW appeal went up and Billy Bowden declined it. The following ball from Ishant was an absolute ripper when he swung it inside only to leave Ponting bewildered as the cherry missed the timbre by a whisker.

The Indian fast bowler continued breathing fire at Ponting as another in-swinger compelled Ricky to retreat. Ishant was in the mood of a war dance as he kept on pressing Ponting with those nasty in-swingers and those loud war-chants called appeals.

Finally, almost after an hour of torment, Sharma scalped his man as Ponting failed to read a delivery completely, misjudging it to be an in-swinging delivery while the ball drifted a wee bit away from the batsman, taking a thick edge to the safe arms of Rahul Dravid. Not all sledges need to take a verbal apparition, a few can even be a match-up between the willow and the leather. Matches between India and Australia have always produced those.