The ongoing tour of Australia 2020-2021 has witnessed almost all sort of injury which can happen to a cricketer on-field. Team India’s injury crisis seems to be never-ending. The list of the injured players increased on Friday after fast-bowler Navdeep Saini walked off the field with a groin injury on day one of the ongoing fourth Test against Australia in Brisbane.

The incident took place in the 36th over of Australia’s innings when Navdeep Saini was bowling to Marnus. After bowling the fifth ball of the over, Saini lied on the ground and looked in discomfort while holding onto his thighs. Eventually, the pacer walked-off the field with the physio. On the previous ball, Saini had nearly claimed the wicket of Marnus, but skipper Ajinkya Rahane missed a simple catch. 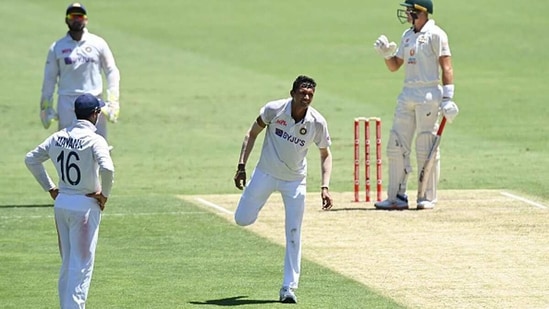 As Saini walked off the field, medium-pacer and India’s opening batsman Rohit was then summoned to complete the rest of the over, with only one ball to go.  Now BCCI has finally given an update on the fitness of the young bowler, who had complained of pain in his groin and was looked after by the medical team. BCCI took to their social media and wrote:

“Navdeep Saini has complained of pain in his groin. He is currently being monitored by the BCCI medical team.” Further, BCCI tweeted that Saini has been taken for the scans.

Earlier in the day, India fielded Shardul Thakur, Washington Sundar, Navdeep Saini, Mohammed Siraj, and T Natarajan as the five bowlers for the 4th and the last Test. This bowling unit is the most inexperienced bowling unit since the 1930s, with Mohammed Siraj being the most experience bowler with 3 Tests.