Former Indian all-rounder and World Cup winner, Yusuf Pathan left everyone in shock after he announced his retirement from all the formats of cricket. Over the years, Yusuf Pathan has contributed a lot to the Indian cricket.

Besides being a two-time world cup winner and has also won the title of the Indian Premier League twice with Kolkata Knight Riders (2012 & 2014) and once while playing for Rajasthan Royals (in 2008). Apart from being the hard-hitting middle-order batsman, Yusuf has also been a handy off-spinner. While he has scored 810 ODI runs and 236 T20I runs for India with the bat, he has also picked 46 wickets in limited-overs international cricket.

“The time has come today for me to put a full stop to this innings of my life. I officially announce retirement from all forms of the game,”

“Winning two World Cups for India and lifting Sachin Tendulkar on my shoulders were some of the best moments of my career,” he added.

Here, check out the whole note: 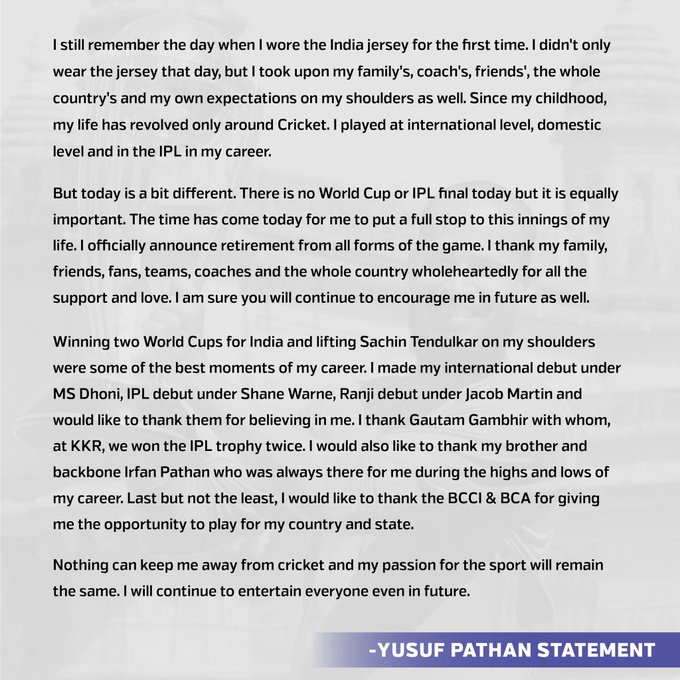 Sharing the note, Yusuf thanked everyone for suppoting him throughout. He wrote:

“I thank my family, friends, fans, teams, coaches and the whole country wholeheartedly for all the support and love,”

I thank my family, friends, fans, teams, coaches and the whole country wholeheartedly for all the support and love. #retirement pic.twitter.com/usOzxer9CE

Meanwhile, as soon as Yusuf Pathan announced his retirement from the game, social media was soon flooded with interesting reactions. From cricketers to fans everyone paid tributes to the former cricketer for his contribution towards the Indian cricket.

Wishing a happy 2nd innings to both @iamyusufpathan & @Vinay_Kumar_R!
To play for India is a matter of pride and the two of you have been great students of the game.

Congratulations to both of you on your wonderful careers. pic.twitter.com/YR2onI9DzE

Thank you Yusuf Pathan for your valuable contribution to Indian cricket. You will always be remembered for your fearless batting. Wish you all the best for your future endeavours & hope you continue to enrich Indian cricket through your #cricket knowledge. @iamyusufpathan @BCCI pic.twitter.com/DStRSXg0D2

Yusuf Pathan announces retirement from all forms of cricket

Yusuf Pathan has announced his retirement from all forms of the Cricket ?
Thanks for all the memories @iamyusufpathan ?❤️ pic.twitter.com/YR9PjpcOq7

Your contribution to the world class cricket will always be remembered!!

Thank you @iamyusufpathan. Really enjoyed watching those power packed innings. You were a favourite of our family. No game was over till you were done. Enjoy this phase.

An explosive batsman ?
An useful bowler ?
A Champion all rounder ✌
Thank you #YusufPathan for many memories. Happy Retirement ?@iamyusufpathan pic.twitter.com/juX3kuNVop