Eoin Morgan, Jos Buttler And Brendon McCullum Under Fire For Mocking Indians: The cricketing calendar went into a frenzy after the postponement of the 2021 edition of the Indian Premier League due to the outbreak of the COVID-19 crisis in the tournament’s bio-bubble. The Board of Control for Cricket In India (BCCI) is desperately looking for a window to complete the season this year, with more than half the season still left to be played.

Over the last few days, media reports have emerged that the IPL 2014 will be played later in the year from 19th September to 10th October in the United Arab Emirates. However, the 2nd phase of the IPL 2021 has a complication as most other countries have international commitments at the time. Infact, the England Wales Cricket Board has already announced that their players won’t be released for the tournament. Meanwhile, amidst all this, former New Zealand skipper and current KKR head coach Brendon McCullum alongwith England cricketers Jos Buttler and Eoin Morgan have come under the scanner after old tweets by the trio went viral on social media. The tweets went viral after Ollie Robinson issued a public apology after being found guilty of posting racist tweets.

Well, for the unversed, the reports of Ollie Robinson’s racist tweets from the past have been making rounds on social media. In the same line of events, several big names from the England cricket team including the likes of Jos Buttler, Eoin Morgan have been found guilty of mocking Indian English in the past.

Yes, you read that right. Brendon McCullum has also found himself under hot water for being a part of the same act.

A few tweets have been making rounds on the internet, where they can be seen possibly making fun of Indian English as they talked in improper and tattered ways.

Here, check out the Tweets: 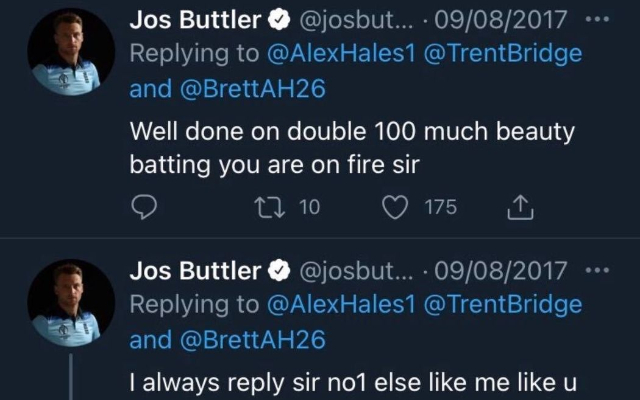