It has been a while since the fans saw David Warner on the cricket field, however, the star batsman never fails to grab all the limelight on social media with his amazing posts. It won’t be wrong to say that he is one of the most entertaining personalities in the cricket world.

He is very active on his social media, where he keeps sharing haring intriguing photos and videos to keep his followers engaged. His Instagram page is flooded with videos of him dancing and enacting famous dialogues of Telugu cinema.

Recently, the cricketer was at it again as he shared a fan-made morphed poster of the much-awaited Telugu movie RRR. The incident took place after the movie makers released a new poster on Tuesday (June 29) where lead actors Ram Charan and Jr NTR can be seen enjoying a bike ride.

Now, in the image shared by David Warner, a fan replaced the fane of David Warner and Kane Williamson. Sharing the picture, Warner expressed:

“This stuff makes me we have such amazing supporters. Thanks for sending in your pics and videos. So much love,”

The post soon went viral and was flooded with amazing reactions from the fans to it. However, the comment that stole all the limelight came from Kane and Warner’s SRH teammate Rashid Khan also cheekily reacted to the morphed poster and wrote: “Helmet guys.” 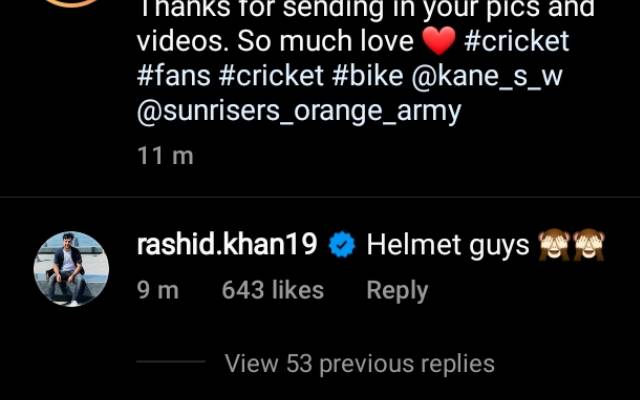 Meanwhile, Warner was last seen plying his trade for Sunrisers Hyderabad in the first half of the IPL 2021. However, the cricketer had a forgettable journey as he was sacked from the position of captaincy by SRH.