Former Indian cricketer and world cup hero Gautam Gambhir is one of the one of the most active cricketers on social media as he keeps his fans updated about his life and often shares pictures of himself and his family members. He enjoys a fan following of 2-2 million on Instagram and always uses funny and interesting captions to his posts, that never fails to grab the attention of the fans.

Recently, he took to his social media and shared a picture of himself, where he can be seen standing by the sea with a stoic expression. He can be seen wearing a comfortable shirt and linen pants. Sharing the picture, Gambhir wrote:

“No one can be you. That’s what makes you special.”

The post went viral in no time and was flooded with amazing reactions from the fans to it. The post also caught the attention of former Indian cricketer Yuvraj Singh, who stole all the limelight from the post with his hilarious comment on it.

In his comment, Yuvraj Singh took a hilarious dig at Gambhir for always being so serious. He wrote: “GG, photo mai toh smile karde”

(Which roughly translates to: Gautam Gambhir, at least smile in the photos)

Gambhir was quick to notice the tweet from his teammate and come up with a reply to it. In his reply, Gambhir stated that it is not easy to smile while standing at the edge of the ocean. He wrote:

“@yuvisofficial Smile doesn’t come easy when you’re standing at the edge of the ocean yuvi!”

Here, check out the comments: 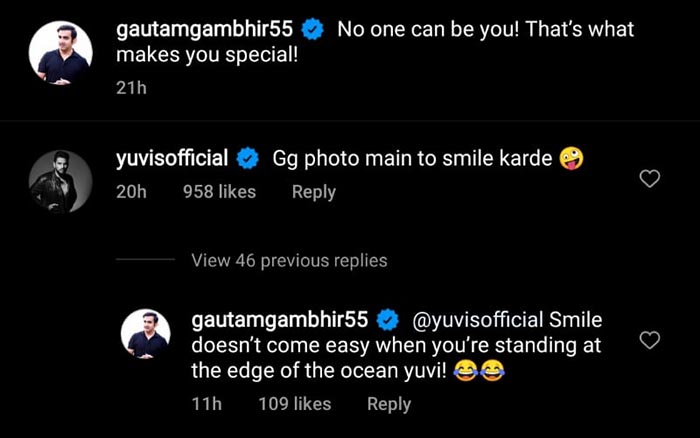