KL Rahul’s knock on the opening day of the ongoing 2nd match against England was no less than poetry in motion. KL Rahul, who had lost his place from the Test side because of a prolonged rough patch, made a stunning comeback into the form.

From being a backup on standby to being drafted into the playing XI in the absence of Mayank Agarwal and Shubman Gill to now scoring his first-ever century at the Mecca of Cricket, KL Rahul’s journey so far in the ongoing series has been phenomenal in every way.

After having put to bat in, Rahul walked out to bat with his opening partner Rohit Sharma. Both the cricketers gave a much-needed powerful start to their side. While his opening partner Rohit Sharma smashed England bowlers to all the corners of the Lord’s, on the other hand, Rahul showed immaculate control and sheer determination as he played the crucial role of an anchor. 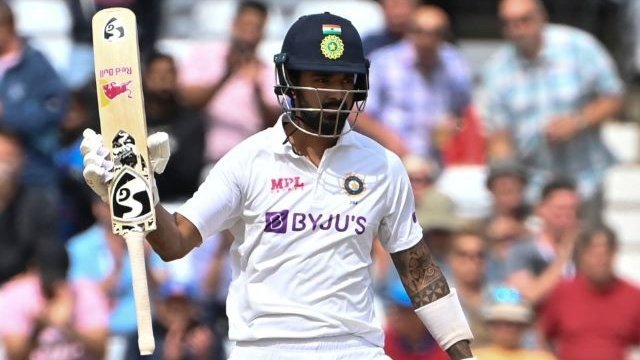 Rahul became the third Indian opener in the history of the longest format of the game to score a century at Lord’s. When Rohit Sharma was dismissed by England bowler James Anderson, KL Rahul was batting on 33 (118), however, soon after his dismissal, Rahul gained pace and scored his century in 212 balls and by the time he reached his century, he had hit 9 boundaries and 1 sixes.

India has finished the opening day at 276 runs with KL Rahul (127) and Ajinkya Rahane (1) being the night watchmen.

Meanwhile, people on social media went berserk after the heroics of KL Rahul and came up with amazing reactions hailing the brilliance of the Indian opener. From cricketers, celebrities to fans, everyone took to their twitter to appreciate the batting skills of KL Rahul.

A century to be proud of for #KLRahul. Loved the innings progression graphic we had showing how patient he was. First 20 took 105 balls and thereafter, he owned the crease

This too a Poetry.
Man was not even in contention for the series, was given a opportunity to open a day before match day and scored a well made 84 in First test and now scoring a stunning century and getting his name in the Lords honour's board.

When Rohit sharma got out on 83, Kl Rahul was batting on 33(118). It takes great skill to bat second fiddle,not get tempted and then turn it on to get a hundred. Fine innings,well deserved of the honours board! #INDvENG #KLRahul

What an innings man ?
A redemption to his Test career ?

What a knock Champ KL Rahul ?
Klass all over!!!
Honours board it is ?#ENGvIND #KLRahul pic.twitter.com/Sq4cRgaOrx

Nothing is cooler and more attractive than a big comeback.
6th test century for KL Rahul, I'm so happy for him ?♥️#KLRahul || @klrahul11 pic.twitter.com/hSNcrnO2lR