The Board of Control for Cricket (BCCI) in India has finally reacted to the controversial claims made by the former South African cricketer Herschelle Gibbs. The former cricketer stirred a controversy yesterday when he accused the Board of Control for Cricket in India (BCCI) of threatening him from participating in upcoming Pakistan’s inaugural ‘Kashmir Premier League (KPL)’.

On Saturday, Gibbs took to his Twitter and ranted about having received a threat from the Indian board and has hit out, insisting that the BCCI had no right to bring their political agendas with Pakistan into the equation.

“Completely unnecessary of the @BCCI to bring their political agenda with Pakistan into the equation and trying to prevent me playing in the @kpl_20. Also threatening me saying they won’t allow me entry into India for any cricket-related work. Ludicrous”

Completely unnecessary of the @BCCI to bring their political agenda with Pakistan into the equation and trying to prevent me playing in the @kpl_20 . Also threatening me saying they won’t allow me entry into India for any cricket related work. Ludicrous 🙄

Later in the day, the Pakistan Cricket Board released a statement expressing its displeasure with the BCCI. In their statement, PCB stated that it would take up the matter with the International Cricket Council (ICC). Here, check out the official statement of PCB: 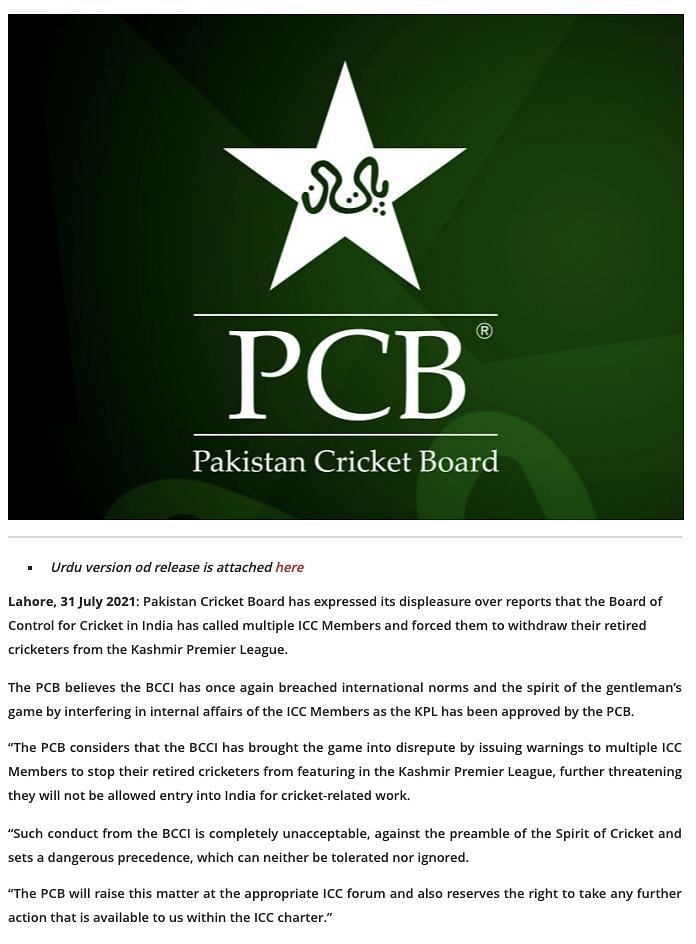 Now finally speaking on this issue, the BCCI official clarified that the Indian board is within its right in making cricketing decisions in its country. The BCCI pointed out Gibbs’ role in the match-fixing saga of 2020. The BCCI official said:

“While one can neither confirm nor deny the veracity of the statement made by a former player who has figured in a CBI investigation into match-fixing earlier, the PCB must understand that even if Gibbs’ statement is assumed to be true, the BCCI would be well within their rights to take decisions with respect to the cricketing ecosystem in India. The fact that the Indian cricketing ecosystem is the most sought after for cricketing opportunities globally, should not be envied by the PCB.”

“PCB is coming across as confused. Just the way the decision to not allow players of Pakistani origin to participate in the IPL cannot be construed as interfering in the internal affairs of an ICC member, the decision, if any, to allow or disallow anyone from participating in any manner with cricket within India is purely an internal matter of the BCCI.”

Further, the BCCI official stated that the PCB are welcome to take up the matter with the ICC and also hinted towards the political interference at the neighboring country’s cricket board. The BCCI official said:

“They are welcome to raise the matter at the ICC, and one can understand where this is coming from, but the question that they need to ask themselves is whether it is on account of government interference in their working since the PM of Pakistan is officially their Patron as per their own constitution. It is time to consider whether this issue also ought to be raised at the ICC,”

The BCCI also questioned if the KPL is the official cricket, the BCCI official added:

“The PCB would do well to peruse the ICC’s classification of official cricket. In the eventuality that a retired player is participating as a player in a tournament, it would not quite be official cricket, and any permission granted would be moot. I am not really sure how they are reading this to mean what they are intending it to mean, but then the PCB’s positioning is always bemusing. They should allow cricket to entertain rather than their decision making.”

The 1st edition of the KPL is expected to be held at the Muzaffarabad Cricket Stadium in Pakistan-Occupied Kashmir. This tournament will have six teams including — Overseas Warriors, Muzaffarabad Tigers, Rawalakot Hawks, Bagh Stallions, Mirpur Royals, and Kotli Lions. Imad Wasim, Mohammad Hafeez, Shahid Afridi, Shadab Khan, Shoaib Malik, and Kamran Akmal will be leading these teams as skippers respectively.