Veteran Indian cricketer Dinesh Karthik has been enjoying his time in the commentary box lately. Ever since he made his commentary debut during the World Test Championship final, DK has been entertaining everyone with his hilarious and witty comments and deep analysis.

However, apart from his amazing commentary skills, it is his dressing sense that has inspired many. People are loving the stylish looks of the wicketkeeper-batsman. From his floral shirts to his dapper suits, DK’s fashion game is always on-point and we are loving every bit of it.

Recently, DK took to his official Instagram account and shared a stunning picture of himself, where he can be seen posing in different attires. Sharing the pictures, DK wrote: “Vibe Check”.

The post went viral in no time and was flooded with amazing reactions from the fans to it, who were left in awe of the stylish cricketer. However, the comment that stole all the attention came from Australian cricketer Pat Cummins.

Australian pacer, Pat Cummins, who is also Karthik’s Kolkata Knight Riders (KKR) teammate posted a cheeky comment, where he asked DK how many suitcases the veteran carried to England for his stint as a commentator. He wrote:

The comment soon caught the attention of Dinesh Karthik, who came up with a hilarious reply. In his reply, DK trolled himself and left his fans in splits. He mocked himself by writing that he packed them a little more than the runs he scored. He wrote:

“@patcummins30 well, let’s just say, a little more than the runs I score,”

Here, check out the comments: 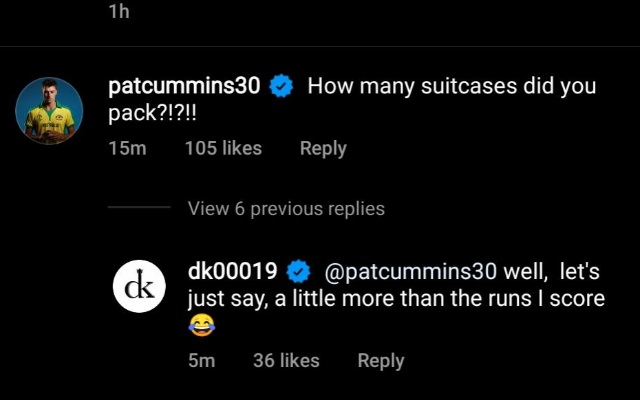 For the unversed, Dinesh Karthik hasn’t done too well in his recent games.  He has even failed to give the best of his abilities in the last couple of seasons he played for his team Kolkata Knight Riders in IPL. In IPL 2021, which was suspended mid-way, DK managed to score only 123 runs in the seven games he played. As a result, his team lost five of their first seven games.

Nevertheless, it would be interesting to see if DK is able to make a comeback for KKR in the upcoming second leg of the tournament, which will kickstart next month in the UAE.