The second leg of the Indian Premier League will kickstart from September 19 in the UAE. The fans are waiting excitedly for the season to resume. Along with the fan, the cricketers are also waiting for the action to unfold yet again. Indian spinner Yuzvendra Chahal too cannot wait for all the fun to resume.

Yuzvendra Chahal, who is known for his hilarious sense of humor and jokes, was once again at it. Recently, he took to his official Instagram account to express his eagerness to take charge of the field. Chahal shared a picture with India and RCB skipper Virat Kohli from the first phase of the IPL 2021.

In the picture, Virat and Chahal can be seen discussing some plans as Kohli has a serious expression on his face. Sharing the picture, Chahal wrote:

The post went viral in no time and was flooded with reactions from the fans to it. However, the comment that stole the attention came from Indian and Kolkata Knight Riders’ cricketer Kuldeep came up with a hilarious reply to Chahal’s post, where he wrote: “19 ke baad. (After September 19.),”

But the banter didn’t stop here, as Chahal came up with an even funnier reply. He replied: “21st se pehle nahi (Not before 21st ).” 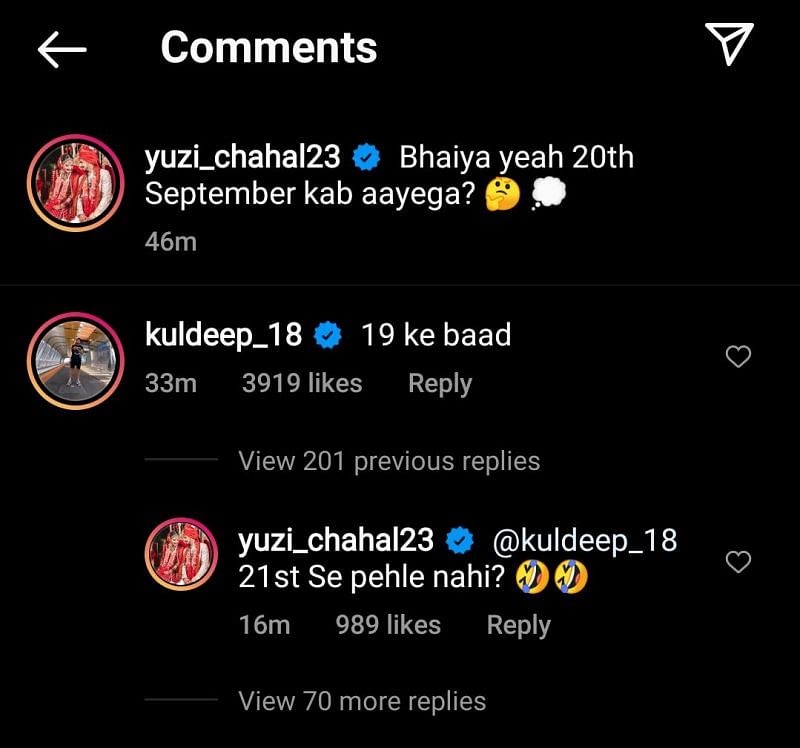 Meanwhile, Kuldeep Yadav and Yuzvendra Chahal will face each other when their teams Kolkata Knight Riders and Royal Challengers Bangalore will lock horns on September 20.