Punjab Kings’ opening duo – Mayank Agarwal and KL Rahul started the second phase of the Indian Premier League with a brilliant note as they gave a flying start to their team against Rajasthan Royals. Time and again, Rahul and Mayank have stolen the show with their brilliant partnership and on Tuesday night they stole all the limelight once again. 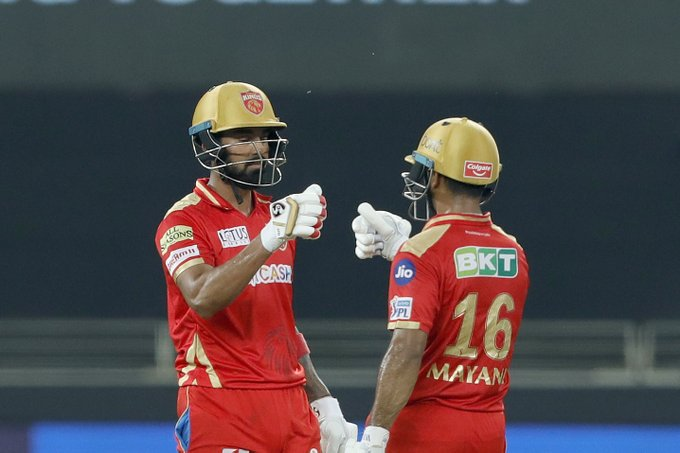 The stylish duo walked out to open the innings for Punjab Kings, chasing a target of 185 runs, and they formed an impeccable partnership to register their 4th-century run partnership.

Rahul played a stunning knock of 49 runs, however, he missed his half-century with only one run. He got a thick outside edge on his cut and the catch was taken by Kartik Tyagi at short third man. Rahul’s knock was laced with four boundaries and two sixes.

On the other hand, Mayank Agarwal too followed Rahul’s footsteps as he was soon dismissed off a Rahul Tewatia’s delivery. Tewatia gave a good fight and served him a fuller length outside off. Agarwal was looking for an inside-out shot over extra cover but all he could manage was a thick outside edge on his shot. He walked back to the pavilion after playing a stunning knock of 67 runs, where he smashed 7 fours and 2 sixes.

Meanwhile, fans on social media went berserk after the stunning performances of the opening duo. From cricketers, fans to experts, everyone came up with amazing reactions while hailing the brilliant partnership of the opening duo of KL Rahul and Mayank Agarwal. There were many, who came up with hilarious memes while praising their amazing knocks.

Here, check out the Tweets:

4th Hundred run partnership between KL Rahul and Mayank Agarwal – one of the finest opening pair in T20 in last few years.

KL Rahul and Mayank Agarwal are perhaps the all-time best opening pair in IPL in terms of performance.
No cap!#PBKS #SaddaPunjab

It looks like dropping Gayle wasn't really a bad thing to do looking at this opening partnerships between KL Rahul and Mayank Agarwal. And playing him at 3 doesn't sit right to me. #PBKSvRR #IPL2021

Mayank agarwal ,kl rahul and dhawan , shaw best opening pair in this ipl or from 2020 ?