Once upon a time, when Shardul Thakur walked out on-field wearing jersey no.10, the Indian fans had trolled him left, right, and center, as that jersey number has etched a special place in everyone’s heart as it was earlier donned by the God of Cricket, Sachin Tendulkar. However, things have changed today, wearing jersey no.10, Shardul Thakur has done something that even Sachin Tendulkar couldn’t do.

Shardul has impressed one and all with his performance and is receiving praises from all corners for his batting heroics. The Mumbai-based cricketer has injected a dose of adrenaline into India’s batting challenge.

On Day 4 of the fourth Test match, Shardul walked out to bat after the quick dismissals of India’s skipper Virat Kohli and vice-skipper Ajinkya Rahane. He formed an amazing partnership with Rishabh Pant and scored a brilliant fifty post Lunch to put the visitors in control. This was the second half-century for him in the ongoing 4th Test and both of them turned out to be game-changing knocks for India. 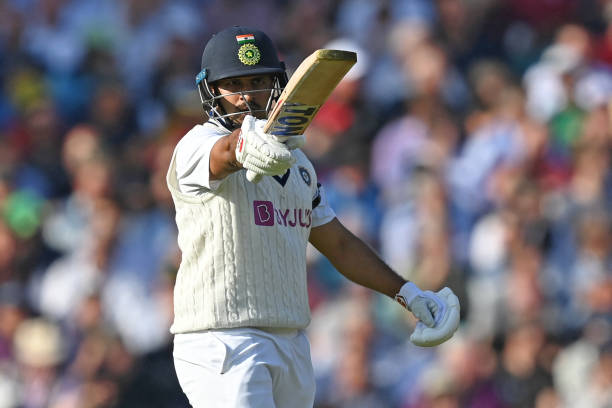 Thakur started his innings with all guns blazing. From stunning straight drives to his amazing six, Shardul played some cracking shots. However, the Shardul Thakur show soon came to end after he was caught out at first slip off Joe Root’s delivery. He was dismissed after scoring 60 runs off 72 balls, smashing 7 fours and a six.

Meanwhile, social media has been flooded with amazing reactions from fans. Among many, ESPN Cricinfo’s editor-in-chief came up with a beautiful tweet for Shardul, where he revealed that the talented cricketer has become the first Indian batsman to score 2 half-centuries in the same Test. He wrote:

“Shardul Thakur becomes the first Indian batsman to score two half centuries in the same Test in this series. Who would’ve thought #INDvENG”

Shardul Thakur becomes the first Indian batsman to score two half centuries in the same Test in this series. Who would’ve thought #INDvENG