Pakistan’s sensational opener Mohammad Rizwan has been in some terrific form off-late. he has impressed one and all with his back-to-back terrific performances with the bat. On Wednesday, Rizwan scripted history as he became the first batter to score 2,000 runs in T20 men’s in a single calendar year.

Chasing a target of 208 runs, Pakistan started with all-guns-blazing from their openers Mohammad Rizwan and Babar Azam. Rizwan was well-supported by Babar Azam, who was also seen in hot form. While Babar slammed 79 runs in 53 deliveries, smashing 9 fours and 2 maximums. On the other hand, Rizwan scored 87 runs off 45 balls, smashing 10 fours and 3 sixes.

However, it was Asif Ali who wrapped up the win for the Pakistani side as he played an unbeaten knock of 21 runs off 7 balls, smashing 2 fours and 2 sixes. All thanks to Rizwan and Azam’s sensational forms, Pakistan completed a 3-0 clean sweep against West Indies in the T20 series. 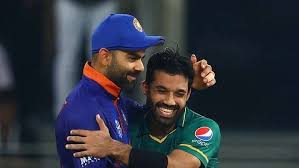 Meanwhile, apart from this, Rizwan has played several crucial knocks for his country this year. He had an incredible outing during the T20 World Cup. Riding on his terrific performances with the bat, his team managed to reach the semifinals in this year’s T20 World Cup. In this year so far, Rizwan has scored 11 fifties and a century in T20Is.

Pakistan will be looking forward to their star opener continuing his incredible form heading into the next year.

David Warner Made Young Fan's Day With His Heartfelt Gesture

Virat Kohli vs Rohit Sharma: 2 Questions That Their Fans Must Answer