What a brilliant show with the blade by India’s star all-rounder Ravindra Jadeja. He wreaked havoc with the bat as he rained fours and sixes at the HPCA stadium in Dharamshala in the second T20I against Sri Lanka. Jadeja played some stunning shots that were no less than a treat to the eyes.

After Sri Lankan bowlers got off to a brilliant start by dismissing the opening pair within the powerplay. Shreyas Iyer and Sanju Samson forged an 84-run target to bring India back in the game before Ravindra Jadeja walked out to bat with all-guns blistering and took the game by storm. 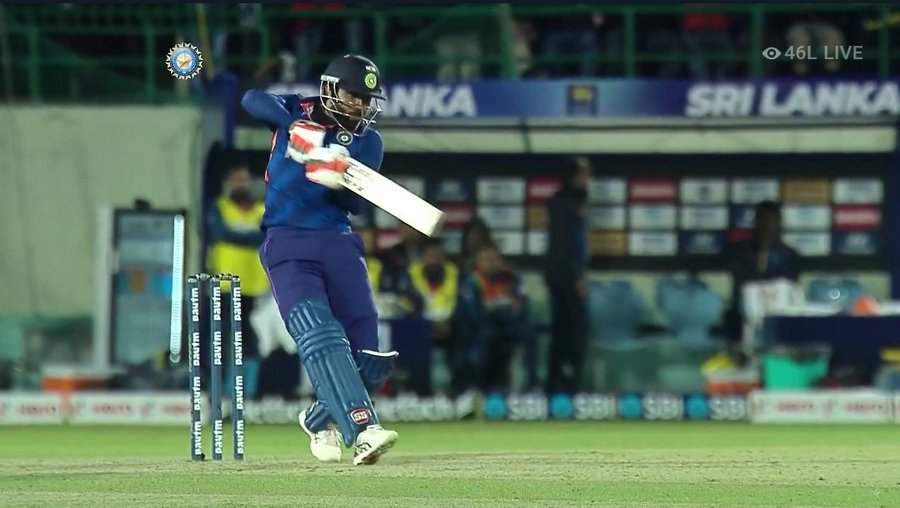 Ravindra Jadeja walked out to bat at number 5, after the dismissal of Sanju Samson and took the game by storm. He smashed 21 runs in just an over, making everyone sit on the edge of their seats. He smashed some classy shots before he took the Indian cricket team to victory alongwith his batting partner Shreyas Iyer. Jadeja played an unbeaten knock of 45 runs off just 18 balls.

He played a fiery knock to ensure team India’s second victory in the ongoing 3-match T20I series. His stunning knock was laced with 7 fours and 1 six.

Meanwhile, fans were left in awe of Ravindra Jadeja’s terrific knock. Fans flooded the social media with their amazing tweets and reactions to it.

Ravindra Jadeja the finisher tonight – 45* from just 18 balls with 7 fours and 1 six. Finished the game early for India, a top class innings by Jadeja. pic.twitter.com/k4ZgFxhk9G

Ravindra Jadeja has surely sacrificed his bowling to the dark lords in return for whatever he's been doing with the bat lately. Cause man has ridiculous improved his white ball batting in the last couple of years.

Not a slog from Jadeja, just classy shots, and he finishes with 45(18). Absolutely loved the way Shreyas Iyer played the field. That is 2 in 2 now that he has played like this.

21 runs off the over for Ravindra Jadeja. What a luxury this guy is to the team. Man's been putting on a show with the bat for a while now.

Jadeja doesn’t get the Credit he deserves . Easily one of the most impactful Indian cricketers “All time”. #Ravinderjadeja

Sir Jadeja warming up for IPL.

Sir Ravindra Jadeja is back and how. What an innings, what a win.

Best all rounder of this generation
Sir Ravindra Jadeja ?? pic.twitter.com/aokqtkSiH1

We are not here to take part
We are here to take over
Sir Ravindra Jadeja for you mfs pic.twitter.com/pSEkAuLRzI

Sir Jadeja Finishes off in his style???? What a outstanding and top class knocked playing by Jadeja -45* from just 18 balls with 7 fours and 1 six. #RavindraJadeja #INDvSL pic.twitter.com/rbbVM2G0U8

He is getting better with time like a fine wine. 21 runs in an over, scored 45 runs in just 18 balls. Loving this version of SIR Ravindra Jadeja. The Greatest All-Rounder ever. #GOAT #CricketTwitter #INDvSL #RavindraJadeja pic.twitter.com/rByTvBaZ5B

The Indian cricket team has taken a lead of 2-0 in the ongoing 3-match series. The 3rd T20I match will take place on Sunday.

Also Read: “It Goes Back To 2002..”: Michael Vaughan Revealed The Story Behind Twitter Banter With Wasim Jaffer