India’s young and talented all-rounder Raj Bawa stole the show with his sensational all-around performance in the just concluded 2022 U-19 Cricket World Cup final vs England in Antigua. The Indian cricket team defeated England by 4 wickets in the final clash in Antigua on Sunday and won the 2022 ICC U19 World Cup.

Riding on the terrific performance from Chandigarh boy Raj Angad Bawa, India was able to defeat England by 4 wickets in the summit clash. Raj Bawa, who is a right-arm fast-bowler, first shone with the ball with a sensational fiver (5/31) to help India bundle England out for 189.

During the game, Raj Bawa also created a big record as he became the first Indian male player in history to take five wickets in the final of an ICC event. Bawa surpassed Piyush Chawla, Ravi Bishnoi, and Sandeep Sharma who had previously taken a four-wicket haul in the summit clash of the U19 World Cup final in the past.

Not just this, Bawa’s terrific spell is only the second time in the history of a U19 World Cup that a bowler has taken a five-wicket haul. He broke the record of Pakistan Anwar Ali, who had picked a fifer in the 2006 final against India and conceded just 35 runs. 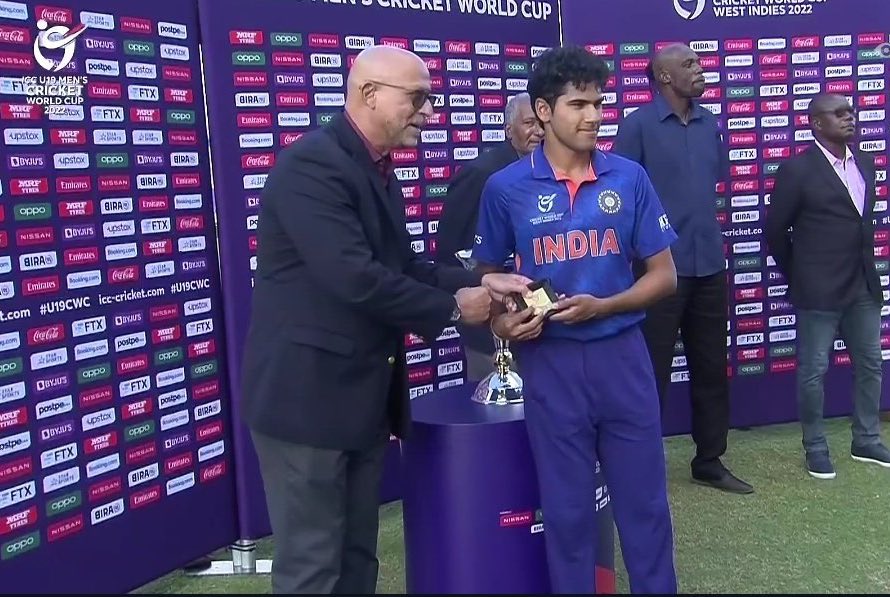 After stealing the show with his stunning bowling, Raj Bawa impressed one and all with his terrific batting performance as he played a crucial knock of 35 runs, helping the Indian side chase down the target of 190 with 2.2 overs to spare. Raj won the player-of-the-match for his amazing performance – both with the ball and the bat.

Meanwhile, fans on social media are hailing the talent of Raj Bawa as he played an instrumental role in India’s victory. From celebrities to fans, everyone took to Twitter and came up with amazing reactions to it.

What a ball from Raj Bawa, remind me of Sreesanth against Kallis in a Test match.

"Raj ruling over the British." – Rohan Gavaskar on commentary.

This raj bawa will do something special in the future. pic.twitter.com/n5cnfY0vh7

RAJ BAWA WHAT A BALL ? pic.twitter.com/0vfgpULr6I

What a ball from Raj Bawa, remind me of Sreesanth against Kallis in a Test match.

Raj Bawa is player-of-the-match in India's U19 World Cup Final win. 74 years ago, his grandfather Trilochan Singh Bawa won a gold medal in Hockey in the London Olympics (1948). #U19CWC