Shivam Dube’s Wife Shared A Beautiful Post After CSK Signed The Cricketer In IPL Auction: Ahead of the IPL 2022 mega-auctions, several young players expressed their desire of playing under the captaincy of MS Dhoni in the upcoming edition of the Indian Premier League (IPL). The likes of Yuzvendra Chahal, Shivam Dube, Deepak Hooda, to Harshal Patel, several young players wanted to play under MS Dhoni.

Meanwhile, Mumbai’s young and talented player Shivam Dube, who had played for RCB and RR in the past, was bought by the Chennai Super Kings and will be seen playing under the captaincy of MS Dhoni in Chennai Super Kings in the upcoming edition of the Indian Premier League.

Shivam Dube walked into the IPL 2022 mega-auctions at a base price of INR 50 Lakh. Lucknow Super Giants and Punjab Kings were involved in an intense war for the 28-year-old and in no time the bid quickly went up to INR 2 crore.

Chennai Super Kings jumped in at INR 2 crore when the Lucknow Super Giants left the bid and the Kings weren’t leaving him anytime soon. Punjab Kings finally backed out after the penultimate bid and CSK acquired the services of Shivam Dube for INR 4 crore.

Shivam Dube was released by Royal Challengers Bangalore in 2020 and was picked by the Rajasthan Royals team in 2021. He featured in the first few games before he was dropped from the squad. However, Shivam came back to the team in the second half of the tournament and played his best knock against MS Dhoni-led Chennai Super Kings.

In the meantime, Dube’s wife Anjum Khan was also extremely thrilled with Shivam Dube joining Chennai Super Kings for the upcoming seasons of the IPL. Anjum took to her Instagram and shared a picture of Shivam Dube and MS Dhoni from a match of IPL 2021. Sharing the image on her Instagram story, Anjum expressed her happiness by writing: “Finally Dhoni team,” with heart-in-the-eyes emojis.

Here, check out the Instagram story of Shivam Dube’s wife: 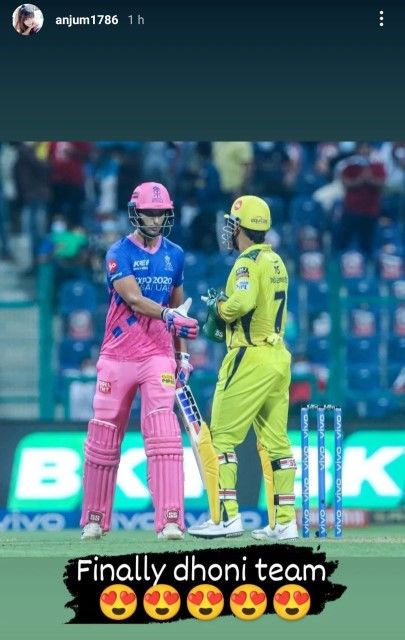 Top 5 Highest Chases In IPL Without Losing A Wicket