Sri Lankan bowlers were blown away by the Rishabh Pant blitzkrieg on Day 1 of the Mohali Test after which India ended the day in a strong position at 357-6. Pant, though, missed his century and fell for 96 – his fifth Test dismissal in the nervous nineties.

On his Test captaincy debut, Rohit Sharma won the toss and elected to bat first at the PCA Stadium in Mohali. Sharma himself started off things briskly, scoring 29 runs off 28 balls but got out to a pull shot, caught at fine leg.

Hanuma Vihari, batting at number 3, grabbed the opportunity with a half-century but couldn’t convert it into a big score. Neither could Mayank Agarwal (33), 100th Test man Virat Kohli (45), and Shreyas Iyer (27). 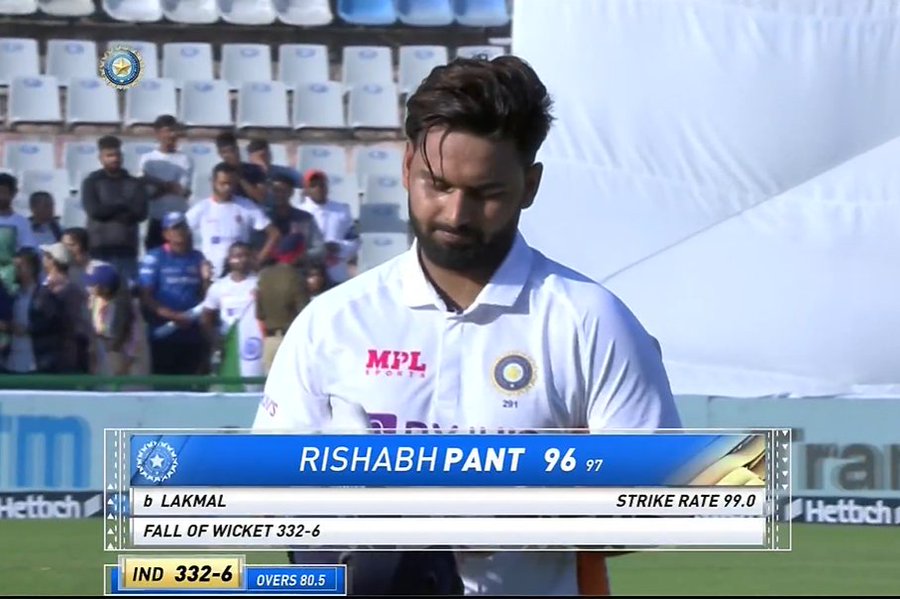 India were in a pickle at 228-5 and the pendulum could have swung either way. Pant ensured that it went India’s way. Pant played sedately – by his standards – for more than half of his innings; he reached his fifty 73 balls, and then went ballistic, especially targetting the Lankan spinners – Lasith Embuldeniya, Dhananjaya de Silva, Charith Asalanka. Pant rumbled from 50 to 96 in just 19 balls but missed out on what would have been his fifth Test century.

While Pant’s innings was lauded by all, the mode of dismissal has come into question. Bowling with the second new ball, pacer Suranga Lakmal swung it across Rishabh Pant, but the ball straightened after pitching on length.

Pant was causal in bringing his bat down, perhaps expecting it to go across him. There was no feet movement from the left-hander as the ball beat the inside edge and crashed into the off-stump. Pant was distraught, almost sitting down on his haunches. He eventually left the field with huge applause from the crowd.

Fans and experts have been since voicing their opinions on Pant’s dismissal, a languid approach to deal with the ball after being in terrific touch. Among those, veteran cricket journalist Vikrant Gupta questioned Pant’s alertness. He reckoned either the left-hander lost his concentration or let his “ego” get in the way as this was Pant’s fifth dismissal in the nineties.

“Either a lapse in concentration. Or his ego getting the better of him when in 90s for Rishabh Pant. Can’t keep throwing away 100s,” Vikrant Gupta tweeted.

Here, check out the journalist’s opinion:

Either a lapse in concentration. Or his ego getting the better of him when in 90s for Rishabh Pant. Can't keep throwing away 100s #MohaliTest @RishabhPant17