Former captain Virat Kohli was the center of attraction in the ongoing 1st Test match against Sri Lanka as he is playing his 100th Test match for India. Kohli became only the 12th Indian player to reach the milestone. The batting maestro was honored for the historic achievement ahead of the start of the game by the Indian head coach Rahul Dravid, who himself has played 164 Tests for India.

Well, ahead of the start of the play, he was felicitated by his childhood idol, Dravid, who handed over a special cap to Kohli on the occasion of his historic game.

Later during the 1st innings, when the opener Mayank Agarwal was dismissed in the 19th over, the crowd present at the stadium in Mohali went crazy, welcoming King Kohli into the crease.

Virat Kohli, who has been going through a rough patch in his career having not scored an international century since November 2019, was expected to make it big on the special day of his career, however, the former captain was dismissed before hitting the half-century.

Meanwhile, the fans present in the crowd were spotted holding some creative cards, that reflected their wait for Kohli’s century. While one of the fans was spotted holding a card that read: ‘Kehndi Hundi Si 100 Banade’ which means ‘ she used to say score a hundred’. Here, the first part of the message has been taken from a famous Punjabi song and it went viral on social media.

Here, check out the picture: 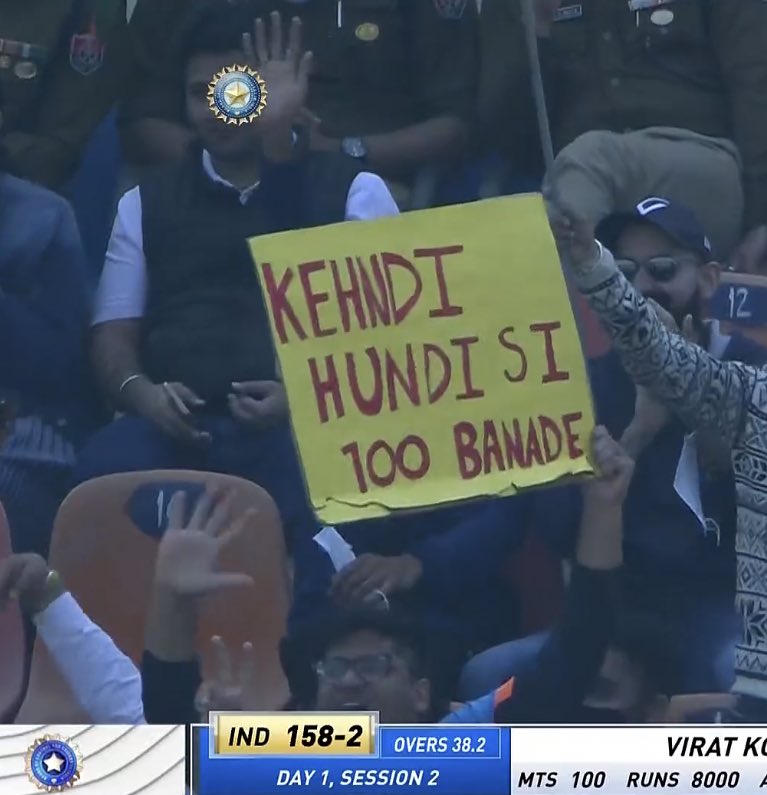 On Day 2 of the game, another fan was spotted holding a very creative card that read “I will not get married until Virat scores his 71st”.

Here, check out the picture:

Talking about his performance, Virat Kohli started off slowly who was delivering a brilliant spell but once he got off the mark, he smashed some stunning shots. He looked more settled as his innings progressed and showed signs of nearing his 71st, however, he was undone by a stunning delivery by Embuldeniya and he eventually walked back to the pavilion after scoring a 76-ball 45.