Two legends in one frame- it was the moment of the day for all the cricket lovers as former Chennai Super Kings (CSK) captain MS Dhoni was seen catching up with his old teammate and LSG’s mentor Gautam Gambhir after a thrilling game against the Lucknow Super Giants (LSG).

Both the cricketers were seen smiling after the game during their conversation, bringing joy to the fans, considering the alleged bitter relations between them.

Well, on several occasions in the past, Gautam Gambhir has openly criticized MS Dhoni regarding several issues. Gambhir’s past statements have led to many believing in a rift between the two stalwarts of Indian cricket. There have been rumors of a rift between the two cricketers however such moments seem to rubbish all such rumors. 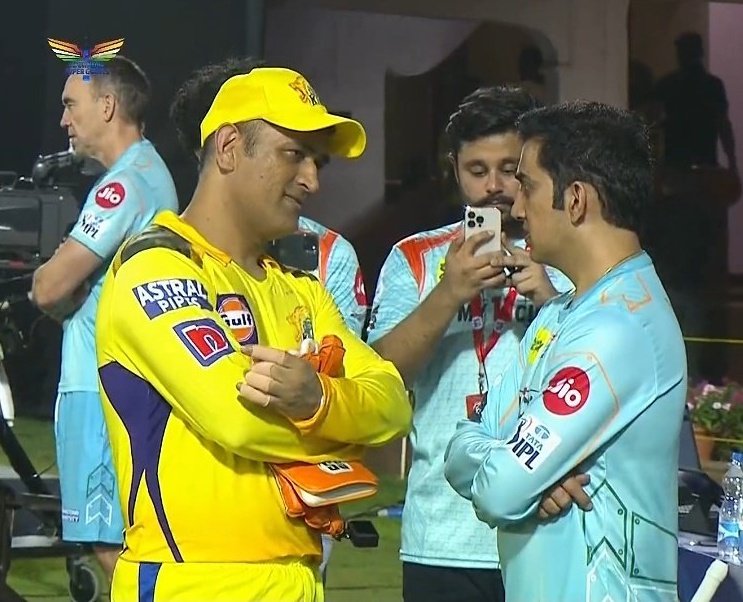 The incident took place after Lucknow Super Kings managed to defeat defending champions Chennai Super Kings in game number 7 of IPL 2022. Later after the game, MS Dhoni and Gautam Gambhir shared a conversation and were seen with big smiles on their faces. The pictures and videos of their interaction have been going viral on the internet and have brought joy to their fans.

Picture of the day in #IPL2022. pic.twitter.com/kfYsCJLTqO

Forget everything Dhoni Bhai, this win of LSG is bigger than any World Cup! https://t.co/WaZg1paErK

Gautam Gambhir with MS Dhoni after the game. pic.twitter.com/4uF1mr11z2

Breaking the internet since eternity….. pic.twitter.com/tIkdFYMMNZ

MS Dhoni and Gautam Gambhir after the match – Two one of the best IPL Captains and players. pic.twitter.com/DJgNUIPEIi

*There's a rift between Gambhir and Dhoni*
Meanwhile they: ❤️ pic.twitter.com/mZOAabjlMR

This is for those who said Gautam Gambhir and Ms dhoni don't have good relationship.
???#CSK #CSKvsLSG #jadeja #ChennaiSuperKings pic.twitter.com/VylIA9Kd2O

One on the field other off the field.

Recently, ahead of the start of IPL 2022, Gambhir had cleared the air on this rumored rift with Dhoni. Speaking to Jatin Sapru on his YouTube show ‘Over and Out’, Gambhir absolutely dismissed the rumors of the rift between Dhoni and him, saying that he has a lot of mutual respect for Dhoni. He had said:

“See I have so much of mutual respect for him and it’ll always remain. I’ve said it on air, I’ll say it on your channel, I can say it anywhere in front of 138 crore people, that if ever in need, I hope he’s never in need, but if ever in need in life, I’ll be the first one standing next to him because of what he’s done for Indian cricket, what he’s as a human being,”