Chennai Super Kings (CSK) batters Robin Uthappa wreaked havoc at the Dr. DY Patil Sports Academy, Navi Mumbai along with his batting partner Shivam Dube as they together rained fours and sixes at the venue and made their fans sit on the edge of their seats throughout their innings.

After losing four back-to-back defeats in the ongoing IPL 2022 campaign, Chennai Super Kings was in desperate need to redeem their form back. All thanks to the batting masterclass of the Robin Uthappa and Shivam Dube, the team was able to post a score of 216 on the scoreboard.

After being asked to bat first, CSK lost Moeen Ali and Ruturaj Gaikwad early in the innings. They were in a spot of bother, however, Shivam Dube and Robin Uthappa joined hands with each other and together they took the game away with a storm. 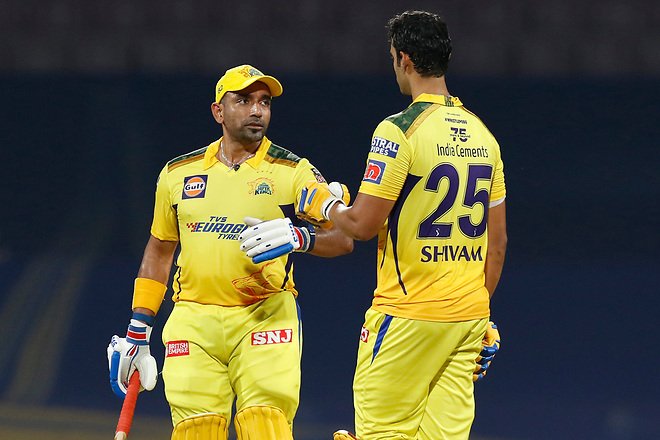 Though, Robin Uthappa started off slow, however, once he was settled on the ground, he switch gears and started smashing the bowlers of RCB to all the corners of the ground. He played a terrific knock of 88 runs off 50 balls, which consisted of 9 sixes and 4 fours. His knock had class written all over it.

He was well supported by Shivam Dube on the other hand, who also played the best knock of his IPL career. However, the talented cricketer missed out on a well-deserving century.

Meanwhile, fans on social media went berserk with the stunning performance of Robin Uthappa with the bat. From cricketers, experts to fans, everyone took to their Twitter to hail the brilliance of the mad show displayed by Robbie. Even legends like Sachin Tendulkar, Irfan Pathan, and Wasim Jaffer joined the bandwagon and hailed powerful hitting by him.

Check out the tweets here:

DY Patil has always been a wonderful track to bat on. Having said that, this has been some fabulous hitting by @robbieuthappa & @IamShivamDube.

Controlled aggression at its best.#CSKvRCB

Well played, Robin Uthappa. What an Innings from him. He scored Brilliant 88 runs from 55 balls including 4 Fours and 9 Sixes against RCB, when he came to bat CSK struggling now CSK 200+ runs. Well played, Robin. pic.twitter.com/PcAVNqdm0G