Athiya Shetty and KL Rahul, the star couple have been dating each other for quite a long time now. They made their relationship public via social media first in 2021, then they made their first-ever red carpet debut at Athiya’s brother Ahan Shetty’s debut film premiere.

They frequently share images of each other on social media. Several times Athiya even join KL Rahul in his international cricket tours. As KL Rahul is currently leading Lucknow Super Giants in the 2022 edition of the Indian Premier League, Athiya had no intention of missing it and leaving any chance of supporting her beau. 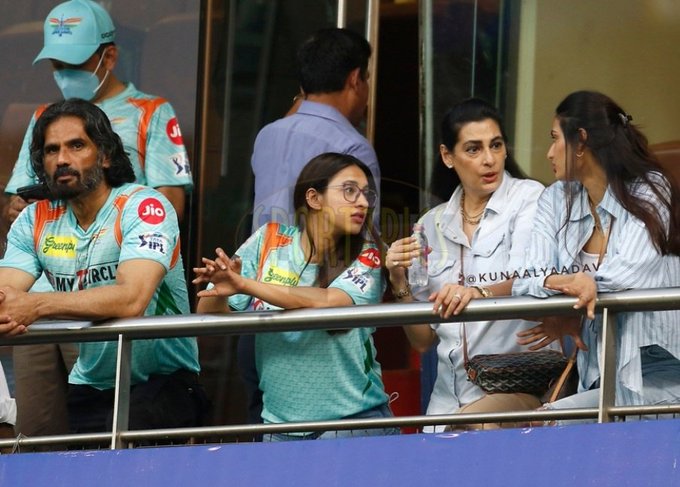 Yes, it didn’t turn out to be a great day for KL Rahul and his team Lucknow Super Giants (LSG) as they were defeated by Rajasthan Royals at the Wankhede Stadium in Mumbai on Sunday. While the game witnessed some interesting moments as far as the on-field action is concerned, however, the day ended on a bad note for the LSG captain KL Rahul.

In fact, things did not go according to plan as the LSG captain was clean bowled for a golden duck by Trent Boult. And once Rahul was dismissed, the cameras panned towards Athiya, who was left heartbroken and shell-shocked by what had happened. She was even seeing mouthing “it’s just one game”.  To make things worse, Lucknow lost the game by three runs.

Here, check out Athiya’s heartbroken picture that has surfaced on social media:

Meanwhile, talking about the delivery by Trent Boult, during the post-match presentation, KL Rahul said:

“I didn’t see it (the ball that got him from Boult), if I did I could have done something about it. Have to give it to him. Was a good ball. “

Talking about Lucknow Super Giants, the KL Rahul-led franchise is sitting at number 5th position on the points table, with 2 defeats and 3 wins.