Rajasthan Royals‘ star opener Jos Buttler is in some terrific form right now as he has managed to impress one and all with his batting heroics. Jos Buttler once again stepped up for his team, scoring a powerful knock to power the target of his team to 169 runs at the scoreboard.

Well, in Rajasthan Royals’ previous match against Mumbai Indians. Jos Buttler played a solid knock of 100 runs off 68 balls, which was his second IPL ton, to help the Royals to 193 runs for 8. Buttler managed to score his second ton off only 66 balls, despite Jasprit Bumrah’s (3/17 in 4 overs) brilliant effort. 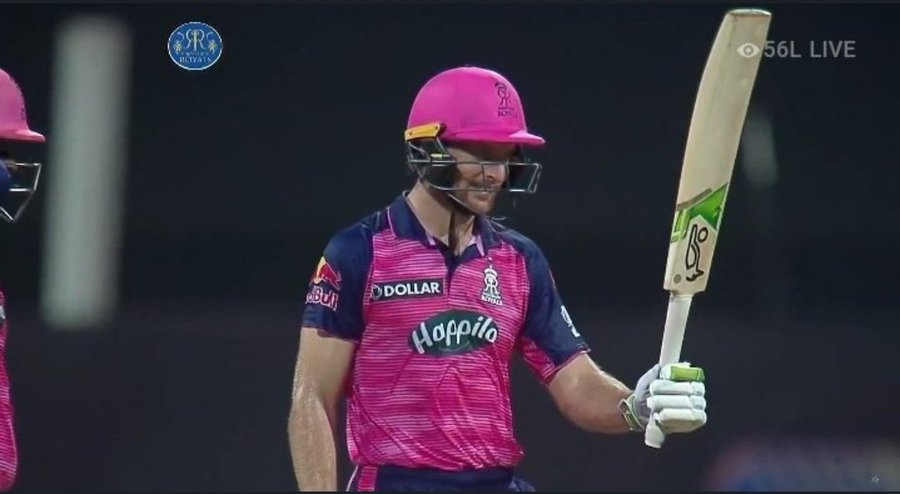 Jos Buttler played another blockbuster knock for his side as he helped his side finish off their innings in style with the biggest over of the innings. Jos Buttler scored an unbeaten 70 off 47 balls with most of the big hits coming in the last two overs, scoring 23 runs off Akash Deep in the final over.

He formed a solid partnership with Shimron Hetmyer and the duo added unbeaten 83 runs for the fourth wicket to help their side to post a competitive total in the end. En route to his knock, Buttler became the first player to complete 200 runs in the ongoing tournament. During his knock, Buttler smashed 6 sixes.

Meanwhile, as soon as the fiery knock of Jos Buttler came to an end, social media was already flooded with amazing reactions from the fans to it. From cricketers, experts to fans, everyone took to Twitter to hail the brilliance of the star player.

Jos Buttler is the first batsman to complete 200 runs in #IPL2022 – the boss of world cricket. pic.twitter.com/jRwMQSGtJW

Jos Buttler hit a six on delivery 8.6 then his next boundary came on 18.5. I thought RCB really put the breaks on him with terrific bowling from Harshal and Hasaranga but bowling Akash deep 20th over? Should have kept one over of Siraj or Harshal. #RRvRCB #IPL2022

Buttler was dropped at 10 and 11 respectively ?

It seems the drops of Jos Buttler doesn't seem costly now for RCB.

What a knock by Jos Buttler – 70* (47). Excellent finish by him, opened the innings, started slowly, but in the end he just smashed everything. 6 sixes in the knock without a four. pic.twitter.com/4gvj8DT3gO

This is why you invest and never throw your wickets buttler bodied intent merchants. Elite player

Jos buttler finishing the inning like his idol ? pic.twitter.com/fDcjMHydh8

Jos Buttler isn’t talked abt much but the cream rises to the top they say and he is in the top league in t20 cricket. Silk and steel!