Mumbai Indians captain Rohit Sharma continued with his lean form as he once again failed to make it big with the bat in the ongoing IPL 2022 game between Kolkata Knight Riders and Mumbai Indians at the MCA Stadium in Pune in Match 14 of IPL 2022.

All eyes were on Rohit Sharma as the game began considering that Kolkata Knight Riders are his favorite opposition. For the unversed, Rohit has scored a whopping 1,015 runs – most against any IPL franchise – against KKR. However, the star batter failed to make any impact with the bat. 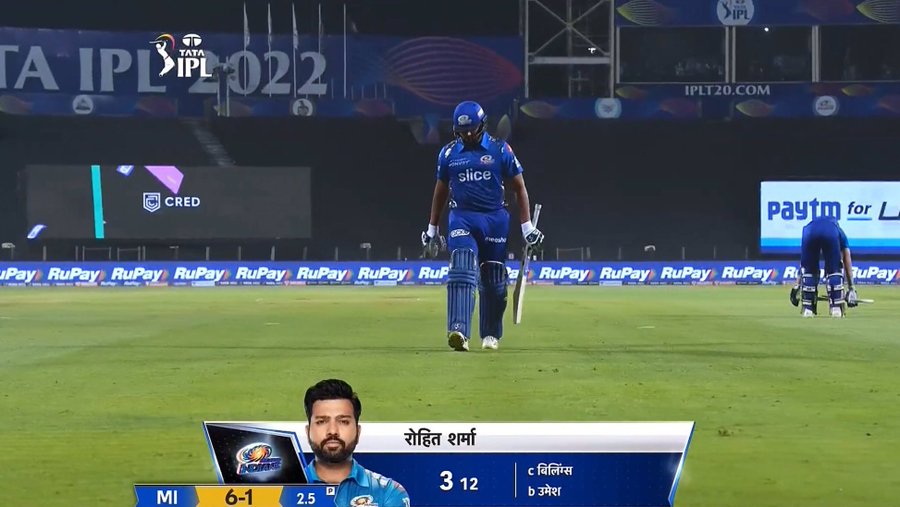 Well, as the game kickstarted, Shreyas Iyer won the toss and chose to bowl first. Rohit Sharma along with the star opener Ishan Kishan walked out to open the innings for Mumbai Indians, however, the team suffered a big blow early in the innings as their main man Rohit Sharma was dismissed by the purple cap holder Umesh Yadav.

The wicket took place in the 5th ball of the second over when Rohit tried to force a boundary and went for a pull-off the short delivery. The ball took his top edge and it filled miles up behind him. KKR keeper Sam Billings ran backward to catch the ball and seemed to be on a collision course with another fielder however the communication worked as the latter pulled out. Rohit Sharma was dismissed after scoring only 3 runs.

Meanwhile, fans on social media were left disappointed with the poor performance of Rohit, who is now getting trolled left, right and center.

Rohit Sharma giving himself extra time for captaincy with his batting. Tactics. #IPL

Rohit Sharma dismissed for just 3. Umesh Yadav the man on mission again, removes Rohit for the 5th time in the IPL.

Unpopular Opinion: Current Ruturaj Gaikwad is better than any version of Rohit Sharma.

rohit sharma preparing to run faster between the wkts pic.twitter.com/vnK7OYZJ7p

We are talking more than five seasons here. #KKRvMI #IPL2022

Rohit Sharma without his super team carrying him. pic.twitter.com/gI0VEJEtEt

Also Read: Do You Know How To Enjoy A Long Drive? Learn From Sachin Tendulkar

IPL 2022: Here’s Why Rasikh Salam Was Banned By The BCCI For 2 Years