After playing a scratchy knock of 39* from 36 balls against Lucknow Super Giants and getting a lot of flak for it, Delhi Capitals skipper Rishabh Pant was back in his aggressive mode versus Kolkata Knight Riders on Sunday afternoon.

Coming in at number 3, the left-hander smashed 27 runs off 14 (strike rate of 192) balls with the help of 2 fours and as many sixes. Pant’s knock ensured that DC kept the momentum going that Prithvi Shaw and David Warner had got off to a rollicking start of 93 runs from just 8.4 overs. 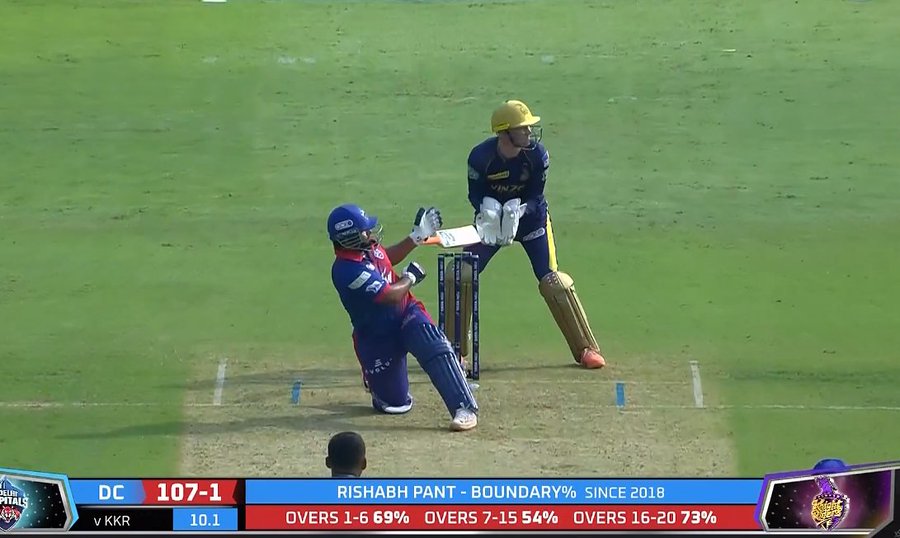 Pant rumbled the score to 148 inside 13 overs before he got out trying to hit a short ball from Andre Russell out of the park. And at one point it seemed that DC were losing steam with wickets of the middle-order batters, it was Axar Patel (22 off 14) and Shardul Thakur (29 off 11) who took the total to 215.

It was always going to be a challenging task for Pant to tackle the spin-twins Sunil Narine and Varun Chakravarthy, especially with the former almost seeming unhittable in the tournament.

But Pant took on KKR’s main weapon, Narine, for his first boundary and then slammed Chakravarthy for a maximum.

What happened next was hilarious as Pant lost his bat while attempting a reverse sweep to Chakravarthy. He managed to connect it well enough so that the ball brisked to the boundary line. However, Pant could have lost his wicket as he lost the grip of his bat and it flew just over the stumps! Pant had a wry smile on his face as picked up his willow.

Pant was in no mood to spare anyone as he walloped Australia’s Test captain, Pat Cummins, for a gigantic maximum over straight down the ground even while losing his shape, his power coming to the fore once again. He’d get out soon after that to Russell ending an entertaining knock, one which perhaps signalled the return to beast Rishabh Pant.

IPL 2022: SRH Is Getting Brutally Trolled After David Warner's Heroics