5 Pairs Of Brothers Who Have Played Together In T20 World Cup: It’s a matter of great pride when even a single family member represents your country at the international level. The happiness then doesn’t have any bounds when two siblings get to play together for their country.

In cricket, there have been quite a few father-son or brother-brother pairs who have donned their respective nation’s jerseys. Five such rare brother duos have featured together in the T20 World Cup.

Here are 5 pairs of brothers who have played together in the T20 World Cup: Hard-hitting batsman Yusuf Pathan got to make his India debut in the most pressurized game of his life – 2007 T20 World Cup final vs Pakistan. He opened the innings and scored 15 runs off 8 balls to give India a quick start. His younger brother, Irfan, who was already an established Indian cricketer, became the Man of the Match in the final for his 3-wicket haul as the Men In Blue clinched the inaugural T20 World Cup title.

The pair reappeared in the 2009 T20 World Cup also. The Pathan brother played together in 16 white-ball matches for India, the last one in 2012 before both lost their places. 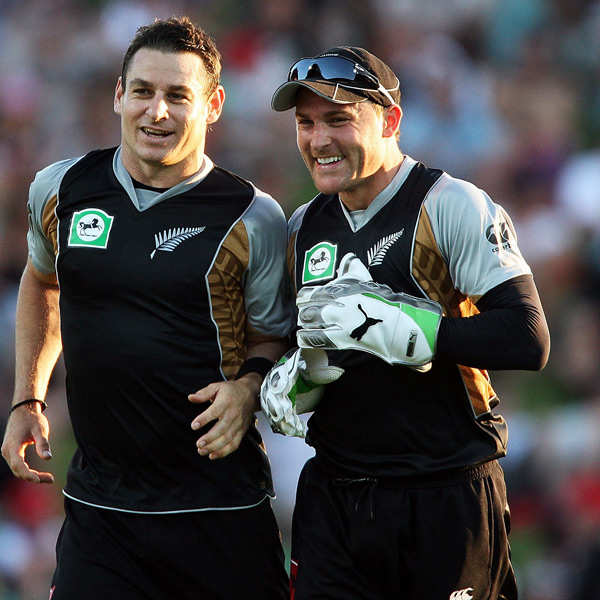 Nathan McCullum and Brendon McCullum, the Dunedin born brothers, played together for a long time for New Zealand – in 114 matches across formats between 2007 and 2015. Brendon was a dashing batsman and wicket-keeper, and Nathan was an off-spinner who could do some lower-order scoring.

They featured together in five T20 World Cups –  2007, 2009, 2010, 2012 and 2014 – before Brendon, the younger and more renowned McCullum, called time on his career. Both enjoyed the highs and lows of New Zealand cricket during that period in conjunction and support of each other.

Dwayne Bravo had become a key member of the West Indies side when his younger half-brother Darren Bravo made his international debut. Both have played in 61 matches alongside each other for West Indies, including one in the 2012 T20 World Cup. While Dwayne, a legendary all-rounder recently retired from all international cricket, Darren remains part of the West Indies team across formats as a senior batsman.

The Morkel brothers, Albie and Morne, are one of the most iconic pairs of siblings to have played at the top level. One, the all-rounder, was an in-demand white-ball all-rounder while other, the lanky one, is one of the greatest South African fast bowler.

Albie and Morne Morkel featured in the eleven together for South Africa 48 times in ODI and T20I cricket, including the first five T20 World Cups.

Legendary Australian players Michael Hussey and David Hussey have played in the same eleven in 67 internationals for Australia in ODI and T20I. Mike retired as a legend of Australian cricket, earning the moniker Mr. Cricket, while David also attained immense stardom as a white-ball specialist. The Hussey brother featured together in the 2009, 2010 and 2012 T20 World Cups.

Also Read: IND vs SA: Umran Malik’s Father Made An Emotional Statement After His Selection

4 Indian Cricketers Who Are Highly Educated