Finally, the Royal Challengers Bangalore ran out of patience with Mohammed Siraj, and after backing him for 13 games he was dropped for RCB’s last league stage game – a must-win one – against the Gujarat Titans on Thursday at the Wankhede. Former Sunrisers Hyderabad seamer Siddarth Kaul gets his first game of the IPL 2022 replacing Siraj.

At the toss, Faf du Plessis, the RCB captain, said that Siraj has been dropped, for Sid Kaul, as they aim to better their powerplay bowling after Siraj’s disappointing season so far.

“One change to see if we can do a little bit better in the powerplay, so Sid Kaul comes in for Siraj,” du Plessis said at the toss. 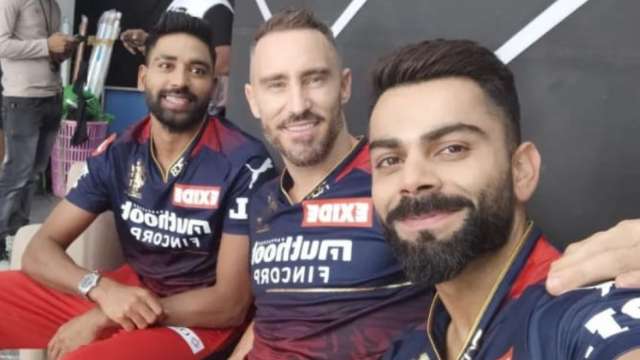 Retained for 7 crore by RCB, Mohammed Siraj hasn’t delivered the goods as expected this season after a couple of impressive years for RCB in the UAE. In 13 matches in IPL 2022, the Hyderabad-born has picked up 8 wickets at a high economy of 9.82 and a really poor bowling average of 55!

Siraj had gone wicketless in the last four matches – in the last game, versus Punjab Kings, he was only given a couple of overs in which he leaked 36 runs – and he hasn’t completed his quota of overs in three of them with du Plessis forced to look at other options as the 28-year-old went all awry with his plans and lines and lengths.

As Faf rationalised, Siraj has been underperforming in the powerplay this season: in 13 innings, he’s only 4 wickets to show in the first six overs while conceding at 9.8.

He’s been struggling for containing runs right from the first game of the season – when, against Punjab Kings, he was smacked for 59 runs; in the third and fourth match, he gave away 43 and 51 runs respectively. Things looked to improve in the middle of the season but as RCB needed wins, Siraj once again went haywire with his bowling plans in the last few matches, eventually leading to his axing from the eleven.

Check out how fans reacted to Siraj’s exclusion:

Siraj was bowling like Sid Kaul all season so we're unchanged

I was so upset Dravid for not playing Siraj .. I was super confident that Siraj will show what he is capable of and show ICT mistake they done… Here today guy is dropped … Hopefully next season they retain him… Letting him go after doing all the work will be a disaster.

Out of Siraj used to give 10 runs in powerplay man.

Only way Siraj can contribute this season for RCB pic.twitter.com/IulGR0xX2V

They called me a mad man for playing Bhuvi over Siraj in t20is. pic.twitter.com/TlCJABGSWa