Quinton de Kock notched up his second IPL century – and first after 2016 – as he and KL Rahul made history against the Kolkata Knight Riders on Wednesday at the DY Patil Stadium.

Both the Lucknow Super Giants openers remained unbeaten – de Kock 140* off 70 balls and Rahul 68* off 51 balls – and registered the largest opening partnership in the history of the IPL – 210 runs. This is also the first time in the IPL that a team hasn’t lost a single wicket of the entire course of 20 overs.

KL Rahul had his typical KL Rahul approach once again: to start slow – he was 18 off 18 balls at the end of the powerplay – allowing de Kock to go hammer tongs and make use of the powerplay and then the LSG skipper looked to tee off. However, while this approach has many times come off for Rahul, today that tee off barely came as de Kock was at the strike most of the time in the death overs – and the South African did blast the KKR pacers. 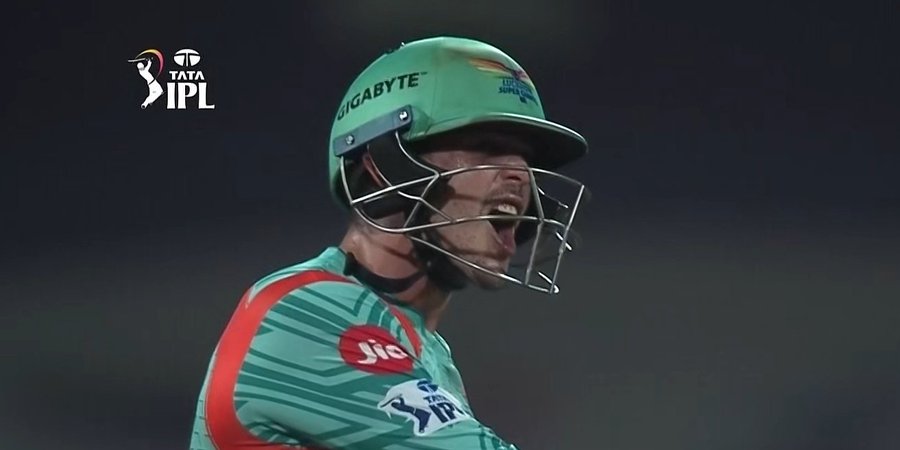 He took three sixes in the 19th over, bowled by the experienced Tim Southee, and then, in the last over hit Andre Russell for four consecutive fours. Though de Kock didn’t connect them off the middle of his bat, he was placing it so well on his day that it went into the gaps; even the thick edges were going over the in-fielders.

Renowned commentator Harsha Bhogle took to Twitter to express his awe on de Kock’s fortunes and the left-hander’s knock vs KKR.

“I think this is what being “in the zone” is. #QuintondeKock,” Bhogle tweeted.

I think this is what being "in the zone" is. #QuintondeKock.

After this brutal assault on the Knight Riders, while Rahul has maintained his second position among the tournament’s highest run-scorers with 537 runs, Quinton de Kock has climbed up straight to the third spot with 502 runs courtesy of his 140-run pasting.

Bhogle also had a praiseful tweet for this solid opening combination of Rahul-de Kock.

“What a buy Quinton de Kock has been for #LSG!! This is some opening combo! Cover all bases,” the commentator tweeted.

What a buy Quinton de Kock has been for #LSG!! This is some opening combo! Cover all bases.

IPL 2022: KL Rahul Made A Big Record In The IPL And Fans Can't Keep Calm