Former India captain and the current BCCI President Sourav Ganguly found himself in a bit of a social media fumble when he tagged the wrong Sunil Chhetri while congratulating the Indian football team for their successful qualification for the AFC Asian Cup on Tuesday.

Sunil Chhetri and Co. qualified for the 2023 AFC Asian Cup after Palestine defeated the Philippines by 4-0 scoreline in Ulaanbaatar. They have won their first two matches of the group stage against Cambodia and Afghanistan is currently placed at the second spot in Group D. For the first time in their history, the Indian football team has made it to the Asian Cup Finals in two successive editions.

A huge fan of football, Sourav Ganguly on Tuesday, to to Twitter to give his wishes to the Indian football team and their captain, Sunil Chhetri. Ganguly, however, tagged the wrong Sunil Chhetri.

“Great work by the Indian Football team on qualifying for the 2023 AFC Asian Cup! Led by the captain @SunilChhetri, the team has shown great spirit and no better place to do this than the Mecca of Football, good support by the fans throughout,” Ganguly tweeted.

This massive error was quickly noticed by the netizens. Soon, the person Ganguly tagged in his tweet himself reacted to it, revealing that he’s from Nepal and that Ganguly had made a hilarious blunder.

After a while, Ganguly deleted his tweet. However, by then, fans on social media had already taken screenshots of it which went viral.

Here, check out the how things transpired with this screenshot: 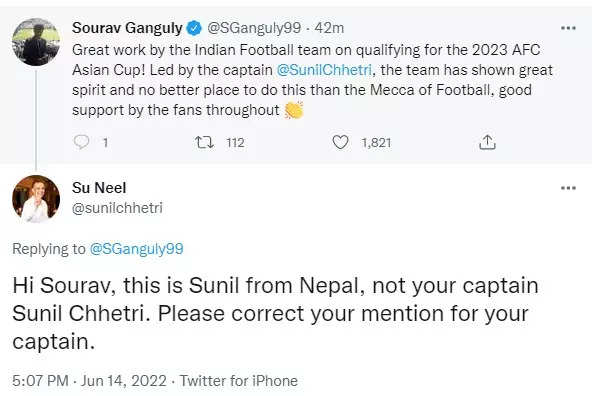 Here are some of the reactions to it:

Not the first time Sourav has struggled to communicate his message to the captain of a sports team! 😉 https://t.co/17qa3fnmo2

Ganguly then made another tweet, this time correctly tagging the Indian football skipper, Sunil Chhetri.

Great work by the Indian Football team on qualifying for the 2023 AFC Asian Cup! Led by the captain @chetrisunil11, the team has shown great spirit and no better place to do this than the Mecca of Football, good support by the fans throughout 👏

Rishabh Pant Is Getting Mercilessly Trolled After He Failed Yet Again