Former Indian cricketer and world cup hero Gautam Gambhir is known for being straightforward and speaking his mind. Gambhir, who switched his career to politics after hanging up his cricketing boots, is an MP from the BJP for the East Delhi Constituency. He never shies away from raising his voice and taking a stand on matters related to cricket and politics.

As the political situation of India is currently susceptible, Gautam Gambhir once again has raised his voice on the matters concerning the current situation of the country.

Gautam Gambhir Came Out In Support Of Nupur Sharma

Well, the recent remarks made by the former BJP spokesperson Nupur Sharma against Prophet Mohammed after she quoted the Hadith have led to protests in various states including Punjab, Delhi, Maharashtra, Gujarat, West Bengal, Jharkhand, and Uttar Pradesh.

The remarks made by Nupur Sharma, followed by an unconditional apology, seem to have divided people in their opinion. Several people including celebrities and cricketers are taking to their social media to express their thoughts and opinions on the ongoing controversy.

Among many, former Indian cricketer Gautam Gambhir came out in support of the BJP spokesperson after the ‘sickening display of hatred and death threats’ against her. In his Tweet, Gambhir questioned the ‘secular liberals’ by writing:

“Silence of so called ‘secular liberals’ on the sickening display of hatred & death threats throughout the country against a woman who has apologised is surely DEAFENING!”

Silence of so called ‘secular liberals’ on the sickening display of hatred & death threats throughout the country against a woman who has apologised is surely DEAFENING! #LetsTolerateIntolerance

The Tweet went viral in no time and was flooded with reactions from the netizens to this. While several people backed Gambhir’s thoughts and came out in support of Nupur Sharma, on the other hand, there were many who protested against her.

Bollywood actress Swara Bhasker, who is also known to be strongly opinionated took to her Instagram story and shared the screenshot of Gambhir’s tweet and took an unnecessary dig at the former cricketer. ISwara wrote:

Check out the story: 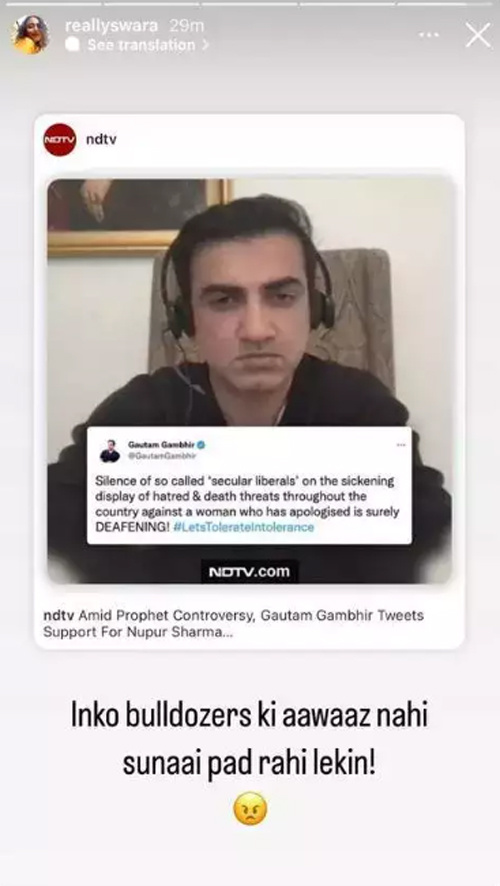 Also Read:IND vs SA: Yuzvendra Chahal Revealed The Technical Changes He Made In 3rd T20I

Babar Azam Is Getting Trolled Massively For His Latest Statement

ENG vs IND: James Anderson Returns As England Announce Their XI For Edgbaston