Veteran Indian cricketer Dinesh Karthik was mockingly termed a “full-time commentator and part-time cricketer” on social media ahead of the IPL 2022 after he was picked up by Royal Challengers Bangalore.

Karthik was part of Sky Sports’ commentary panel during the English home summer last year. However, what only few would have envisaged is Karthik unlocking a beast mode as a finisher, hardly seen of an Indian player in the IPL bar a couple of others.

The Tamil Nadu man hammered 330 runs at a staggering strike rate of 183, helping RCB through to one step closer to the final, and was indisputably the best finisher of the IPL 2022.

His IPL 2022 exploits earned him a recall to India’s team after three years. And Karthik has grabbed his opportunities with both hands in the series against South Africa: in the second T20I he scored 30* off 21 balls taking India to a respectable total, before smashing a match-winning 55 off 27 balls – his first T20I fifty 16 years after making T20I debut – helping the hosts level the series.

While many had given up on the chances of Karthik coming back to the national side when he was donning the commentator’s hat, Rohit Sharma, his former Mumbai Indians teammate and good friend didn’t.

After Karthik’s recent heroics in Rajkot, his conversation with Rohit Sharma from last year has gone viral on social media.

Karthik had uploaded a picture of himself, during his commentary stint in England. To which Rohit Sharma had replied, “You still have some cricket left. FYI!”. Confidently, Karthik responded: “Don’t ever doubt that sham” with the wink emoji.

Here, check out the conversation between Rohit and Karthik: 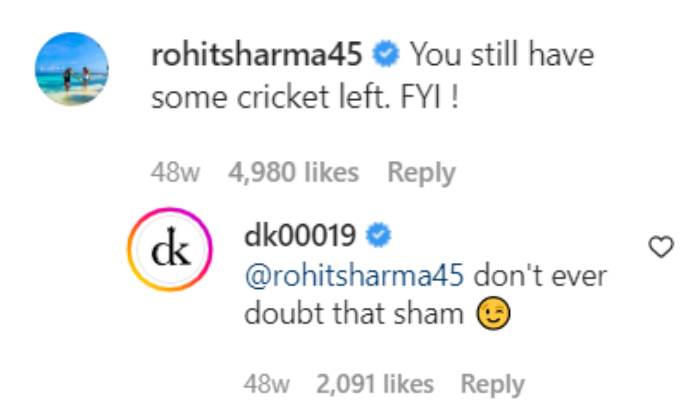 Upon bagging the Man of the Match award in Rajkot, Karthik acknowledged the sense of security and calmness head coach Rahul Dravid has developed in the dressing room that has kept the players calm despite losing the first two matches.

“Just feels good. I am feeling very secure in this setup. Credit to Rahul Dravid; there is a certain sense of calmness. The dressing room is a calm place right now. It is important to learn to embrace pressure. It feels secure and fuzzy. That clarity and the environment helped,” Karthik said.