Dinesh Karthik Gave An Epic Reaction After Rahul Dravid ‘Photobombs’ His Selfie: The Indian team will have most of their first-choice players when they take the field on July 29 for the first of the 5 T20Is against the West Indies. Only pacer Jasprit Bumrah, leg-spinner Yuvendra Chahal and batsman Virat Kohli have been rested for this rubber.

One player who would like to make the most of this opportunity will be Dinesh Karthik. The 37-year-old has made a comeback into the national T20I side in the role of a finisher after a stellar IPL 2022 for the Royal Challengers Bangalore where he was comfortably the tournament’s best finisher. 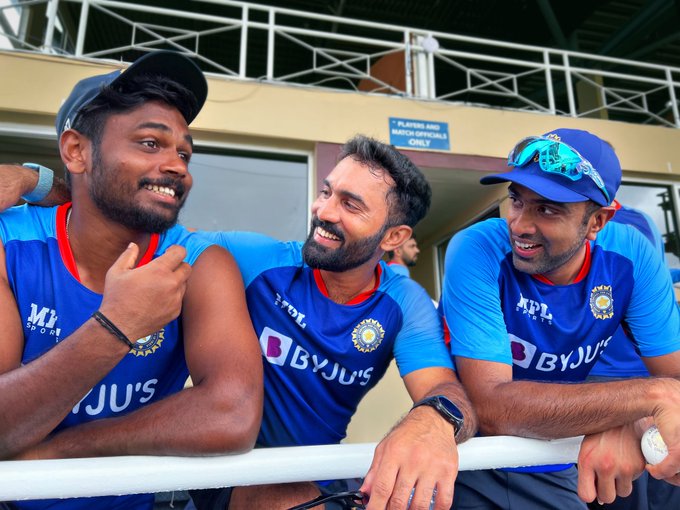 A fun-loving and jolly-natured cricketer, Dinesh Karthik is also quite active on social media. Recently he uploaded a couple of photos, one of which consists of a funny reaction of India head coach Rahul Dravid!

In the first image, DK is seen having a fun chat with Sanju Samson, who is in the ODI squad but not in the T20I squad, along with off-spinner Ravichandran Ashwin, who makes his comeback in the T20I squad.

It is the second photo indeed that’s gone viral on social media. As Karthik clicks a selife with all-rounder Hardik Pandya, in the background Rahul Dravid watched them with a confused reaction from the window.

“In the stands with some legends,” Dinesh Karthik tweeted.

“P.S. Not often you’re photobombed by the one and only Rahul Dravid,” he added.

Here, check out the funny tweet from Dinesh Karthik:

In the stands with some legends 😋

P.S. Not often you're photobombed by the one and only Rahul Dravid 😁 pic.twitter.com/xuDyZDWsxV

Speaking about Dinesh Karthik’s return, the Tamil Nadu batsman made a mark straightaway in the series vs South Africa. The right-hander was pivotal in India drawing the rubber against South Africa as he notched up his maiden T20I fifty and finished the series with 92 runs at a strike rate of 158, but he didn’t quite do much in England.

Karthik, who had smashed 330 runs in the IPL 2022 at an astronomical strike rate of 183, is likely to be on the plane to Australia for the T20 World Cup.