Indian opener Shubman Gill has been receiving praises from all corners for his terrific performances in the just-concluded 3-match ODI series against West Indies. India’s stand-in skipper Shikhar Dhawan also reserved special praise for the talented young opener as he compared his batting prowess with the ‘Hitman’ Rohit Sharma.

Shubman Gill missed out to register his maiden century as he fell short of 2 runs. His sublime knock of 98* runs was enough to outclass West Indies by 119 runs and register a 3-0 rout in the ODI series.  Shubman Gill was brilliant throughout the series as he scored 205 runs in three games against Windies with scores of 64, 43, and 98*. 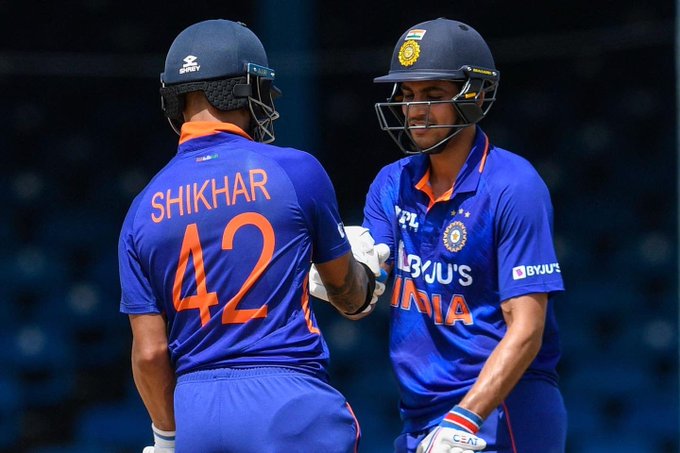 Shubman Gill was well supported by stand-in skipper Shikhar Dhawan from the other end. The duo provided the visitors a smooth start by adding a 100-plus run opening stand.

Later, after the game, during the post-match presentation, Shikhar Dhawan said that it was a complete performance from the team a captain could ask for He was very impressed with the way youngsters took responsibility and ”showed character and turned challenges into opportunities” in India’s 3-0 series win against Windies.

He also hailed Shubman Gill as a ‘very classy player’ and went on to compare him with Rohit Sharma’s batting style. He said:

”He (Gill) has got a very good technique and he is a very classy player. I think he has got a bit of a Rohit touch in him. He seems to have a lot of time the way he bats. Good to see that he scored 98 today. He knew how to convert those fifties into 90s,”

Congratulations Team India on the 3-0 cleansweep vs WI in the ODI series. Superb performance from the team! @ShubmanGill's terrific innings and Captain @SDhawan25's fifty sailed India smoothly through the rain-hit final ODI. Off to the T20 series now. #INDvWI pic.twitter.com/OkTfldOE94

Further Dhawan went on to credit India’s existing domestic structure, especially the Indian Premier League for the growth of young players. He said:

”The ways the boys are responding, they are young but are quite mature and sensible. They can handle the pressure quite nicely. Thanks to our domestic cricket and IPL because of that exposure, the transition to international cricket becomes quite easy. ”Hats off to all the boys. They have been very disciplined and quite practical,’‘ he signed off.