The Indian cricket team registered a 7-wicket win against West Indies in the 3rd T20I match at Warner Park, St Kitts on Tuesday, riding on the blistering half-century of Suryakumar Yadav and a fine cameo by Rishabh Pant. 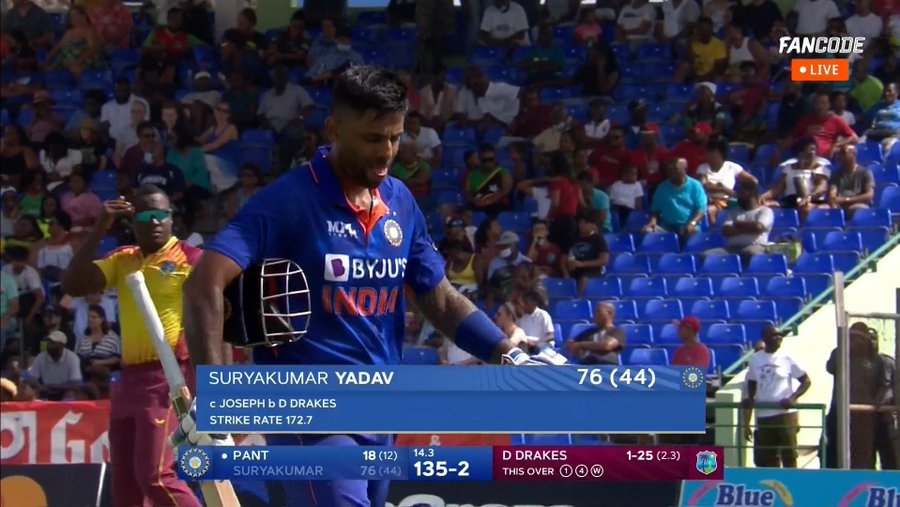 Suryakumar Yadav was then accompanied by Shreyas Iyer in the middle and the duo formed a brilliant partnership and took their team’s total beyond the 100-run mark. However, the partnership was soon broken after Iyer was dismissed by Akeal Hosein after scoring 24 runs in 27 balls.

After Shreyas’ dismissal, Rishabh Pant walked into the crease and took the game by storm. Later, Deepak Hooda and Rishabh Pant smashed great shots and took their team to a seven-wicket victory against the Windies.

However, it was SKY who stole the show with his batting abilities. He played a stunning knock of 76 runs off 44 deliveries, including 8 fours and 4 sixes. He played some magnificent shots, that left everyone in awe of Surya.

Suryakumar Yadav is in a complete different level in T20. #IndvWI pic.twitter.com/kEHISz0sYI

Social media has been buzzing with amazing reactions from fans, cricketers, and experts to this. SKY’s brilliant shot selection led to comparisons with South African great AB de Villiers. While some fans hailed him as India’s ‘Mr 360’, others said that the 31-year-old’s hitting reminded them of the batting legend AB de Villiers.

Among many, popular commentators and cricket analysts, Harsha Bhogle also took to his Twitter and praised SKY’s brilliant performance in the game. In his Tweet, Bhogle expressed his amazement over Surya’s form. He wrote:

“I hope you can bottle and seal the form @surya_14kumar is in. We will need to be reminded that he did play some of the shots he is playing these days.”

I hope you can bottle and seal the form @surya_14kumar is in. We will need to be reminded that he did play some of the shots he is playing these days.

Arshdeep Singh Is Passing Every Exam Rohit Sharma Is Asking Him To Appear: Harsha Bhogle