India captain and opener Rohit Sharma has now overtaken Pakistani big-hitter Shahid Afridi in the list of most international sixes.

This hauled past Afridi’s record during his sizzling knock of 33 runs off only 16 deliveries, wherein he smoked away two fours and three powerfully struck sixes.

Rohit is known for his elegant pull shots and his powerfully smashed shots that often result in a hit over the fence.

Captain Rohit Sharma has been leading India with this new aggressive brand of cricket that they have adopted under his captaincy recently. He had clattered 64 runs off 44 balls in the first T20I vs West Indies, and today, in the fourth T20I, in Florida, the opener’s blitzkrieg in the powerplay meant that India were well on the track for a big total despite losing wickets in the middle-overs.

With him was Suryakumar Yadav, fresh from 76 he’d hit in the previous game, as he too continued on his superb form and touch, whacking 24 runs off 14 balls. The opening stand between Rohit and SKY yielded India 53 runs in 28 balls to set the tone of the innings. 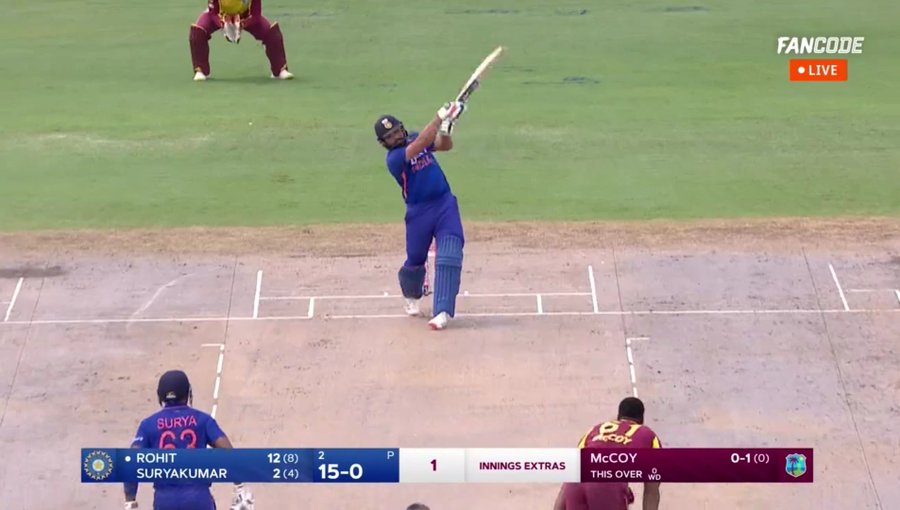 However, both fell in a space of 6 balls after which Deepak Hooda (21 off 19) settled the innings for a while but Rishabh Pant continued with the momentum before being dismissed for 31-ball 44-run knock.

Returning to the eleven, Sanju Samson further made a statement with the bat by scoring 30 runs in 23 balls as West Indies bowlers bowled well in the death overs. But an entertaining and crucial cameo from Axar Patel, who thumped 20 runs off 8 balls, helped India to 191.

Also Read: This Video Shows Why Sanju Samson Has The Most Crazy Fans

This Video Shows Why Sanju Samson Has The Most Crazy Fans