India vs West Indies: India have continued their white-ball winning chariot as they thumped West Indies in their own backyard in both ODIs and T20Is. India clean-swept Nicholas Pooran’s team 3-0 in last month’s India vs West Indies ODI series in Port of Spain. This was followed by an exciting T20I series wherein the visitors …

India vs West Indies: India have continued their white-ball winning chariot as they thumped West Indies in their own backyard in both ODIs and T20Is.

India clean-swept Nicholas Pooran’s team 3-0 in last month’s India vs West Indies ODI series in Port of Spain. This was followed by an exciting T20I series wherein the visitors have taken an unassailable 3-1 lead with one game to go, on Sunday.

The ODI series was a close affair – with the first two matches being decided in the last over – and which could have swung West Indies’ way. The first three T20Is also offered tight and exciting contests between the two sides, but India proved to be too much with both bat and ball for West Indies to handle. 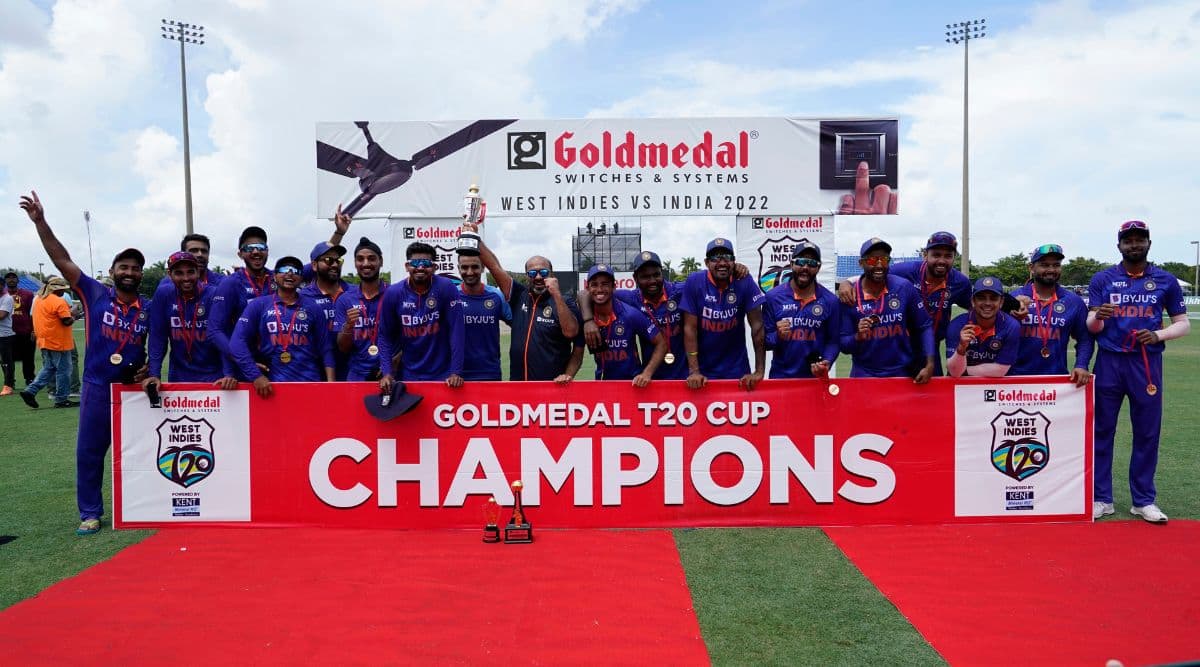 Fans have been once again the live party of the West Indies tour. The fourth and fifth T20Is were played in Lauderhill, Florida, where India got huge support from the spectators. There were chants of players’ names, and cheers with each boundary hit by an Indian batter or wicket taken by an Indian bowler.

The crowd brought up interesting and some hilarious posters and banners to the stadium, the images of the same have gone viral on social media.

Here are the best fan-posters pictures from the India vs West Indies series:

Dinesh Karthik has been in thunderous form since the IPL 2022. He has not only made his return to the Indian side, at the age of 37, but has all but sealed his place in India’s team for the T20 World Cup in Australia in October. He has bagged two Man of the Match awards – vs South Africa and West Indies – after returning to the T20I eleven.

A young fan held up a poster that read: “PUT DK ON THAT FLIGHT TO AUS”. Well, this has in fact been the opinion of all the fans on social media.

Craze for Virat Kohli even though in his absence

Virat Kohli had opted to rest from the entire West Indies tour even though a lot of seniors took part in the T20 series in preparation for the Asia Cup and T20 World Cup.

While Kohli’s form hasn’t been on his side recently, his legions of fans showed their support with crafty banners in West Indies and Florida.

“MISS YOU KING KOHLI” read a poster held by a Kohli fan.

A group of supporters held up a big banner that said, “MISS U KING KOHLI”

Well, not just the runs have been missing, but even King Kohli has been missing for a while – since the IPL 2022, he has been rested from the T20I series vs South Africa, Ireland and tours of West Indies and Zimbabwe, only participating on the England tour, which concluded horrifically for him as Kohli didn’t even cross the score of 20 in any of his 6 innings.

“BELIEVE IN KING KOHLI” Another poster read which was put up by a young boy. The belief has been there – and that has largely kept him in the side – but Kohli soon need to get the runs to repay the faith.

If you haven’t been on social media, here’s a new news for you: Sanju Samson is a cult hero; he has a big fandom, and increasing one, especially for a cricketer who has played only 19 international matches for India and has never been the Player of the Match in any of them.

You can get the idea of his growing following when he got huge cheers from crowds in Dublin and Florida when the Indian skipper announced Samson’s name at the toss that the Rajasthan Royals’ skipper is playing.

In the game in Florida, many Sanju Samson fans came from Philadelphia. “SANJU FANS FROM PHILLY” read a poster which also had a collage of pictures of Samson’s career so far. In the match, he scored 30* off 23 balls to take India’s total to 191. Can he sneak into India’s squad for the T20 World Cup?

MS Dhoni’s last game for India came in 2019. But the Chennai Super Kings skipper continues to have a massive fan-following around the world.

In the fourth T20I, one fan from Dallas, Texas, showed up with a sweet banner for the former Indian skipper that read: “WE MISS U DHONI FROM DALLAS”

The famous boss or wife joke

This kind of poster is now common in sporting arenas where a fan ditches his boss or wife or girlfriend or school homework to attend the game. No surprise in this West Indies series as well: “MY WIFE SAID ME OR CRICKET SO…HERE I AM”

Really? Surely he will have gotten an earful from his wife after the game.

Bonus: This cute little kid won our hearts with his poster.

Also Read: 3 Players Who Might Not Make It To The Indian Squad For Asia Cup 2022