India and New Zealand kicked off their ODI series on Friday at the Eden Park in Auckland. Kiwi captain Kane Williamson won the toss and elected to bowl first on a sunny morning.

The hosts are almost at their full strength - barring Trent Boult, who is not a contracted player of the NZC - the visitors are without a number of senior players - Rohit Sharma, KL Rahul, Virat Kohli, Hardik Pandya, and Mohammed Shami have been rested while Ravindra Jadeja and Jasprit Bumrah are out injured - with Shikhar Dhawan leading the side filled with fringe players. 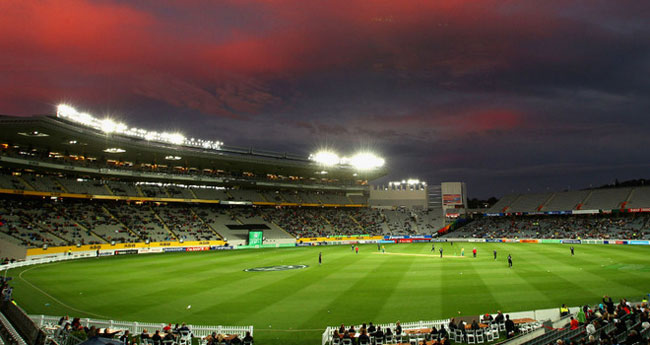 After the match started, renowned commentator Harsha Bhogle brought up why the drop-in pitch at the Eden Park is significant to New Zealand as a country.

Bhogle pointed out that the Eden Park ground is a very multipurpose stadium, because all kinds of public activity can be hosted at this stadium apart from just cricket. Rugby, the national sport of the country, is regularly played here. And after this series, famous singers Billy Joel and Ed Sheeran, and the world-famed band Guns N’ Roses will perform here.

“This is a multipurpose stadium so only one pitch on the square. They play rugby here and in the next few weeks they host Billy Joel, Guns n Roses and Ed Sheeran. Drop in pitches totally change the economics of cricket stadiums,” Bhogle tweeted. His tweet has gone viral now making fans praise the decision to have a drop-in cricket pitch and how this stadium is utilized brilliantly.

This is a multipurpose stadium so only one pitch on the square. They play rugby here and in the next few weeks they host Billy Joel, Guns n Roses and Ed Sheeran. Drop in pitches totally change the economics of cricket stadiums

A drop-in pitch is a pitch that is prepared outside the ground. Then, it is later dropped into the stadium before it is intended to be used. Therefore the name “drop-in pitch.” The primary purpose of a drop-in pitch is to allow the venue to be used for other sports and activities. Eden Park has a capacity of 41,000 fans for a cricket match, and this gets increased for concerts.

Speaking about the match so far, India ended with a sizeable total of 306/7 in the first ODI after Williamson had opted to bowl first. Shikhar Dhawan (72) and Shubman Gill (50) scored half-centuries, forging an opening stand of 124 runs. India then lost a bunch of wickets. Shreyas Iyer’s 80 then along with good cameos from Sanju Samson and Washington Sundar propelled the score above 300.