IND vs NZ: Here Are Speeds Of Umran Malik's First Over In ODI Cricket, Fast Bowler Bowls At 153!!

IND vs NZ: Here Are Speeds Of Umran Malik's First Over In ODI Cricket, Fast Bowler Bowls At 153!!

He is young and raw; he is fast and furious; he is deadly and barely like anything Indian cricket has seen and had. Young Indian pace sensation Umran Malik made his ODI debut on Friday against New Zealand at Eden Park and once again delighted the fans who were left gasping at his speeds, and praising him for much-improved control over his lines and lengths.

Umran Malik was simply sensational in his opening spell as he captivated everyone’s attention with his pace and took a couple of wickets to kick-start his ODI career.

In the case of 307, New Zealand had been given a steady start by openers Finn Allen and Devon Conway. The hosts were 42/1 by the end of the first powerplay at 10 overs with the right-hander Allen dismissed by Shardul Thakur.

India’s stand-in skipper for this ODI series, Shikhar Dhawan, then gave the ball to Umran Malik in the 11th over with the field restrictions now lifted, giving more error of margin to the young debutant.

The fans at Eden Park and the millions watching back home were excited to see the 23-year-old bowl thunderbolts. That is what he did: Malik got the ball rolling in his first over by clocking over 140 KPH in 5 out of 6 balls. 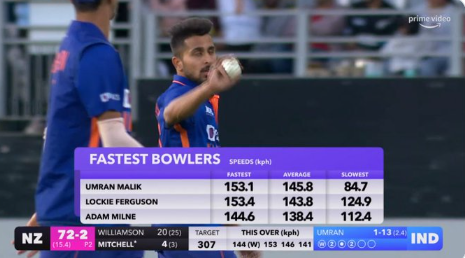 Speeds of Umran Malik’s first over in ODIs:

Malik started off his second over with a delivery of 150 KPH and bowled every single delivery at above 140 KPH in that over.

Then a change of ends brought Malik instant success and his maiden ODI wicket in the form of Devon Conway. The left-handed opener edged to a widish delivery, chasing it well outside the off-stump and nicking it to wicket-keeper Rishabh Pant. Malik celebrated his first ODI scalps animatedly.

Energized with his first ODI scalp, Umran Malik then sent down a ripper at 153 KPH!!

The youngster then bowled two more overs in his opening spell. In his fifth over, bowling to his IPL franchise SRH’s captain Kane Williamson, Malik had the Kiwi skipper squared up with an in-nipper that Williamson edged, but there was no first slip to take the catch.

Umran Malik ended the over, though, with the wicket of Daryl Mitchell, who miscued his whack to a short delivery outside the off-stump, the ball landing in the hands of the deep point fielder. Umran Malik’s first spell read: 5-0-19-2.