IND vs NZ: Suryakumar Yadav&rsquo;s Knock One Of The Best I&rsquo;ve Ever Seen&rdquo;, Says Kane Williamson

IND vs NZ: Suryakumar Yadav’s Knock One Of The Best I’ve Ever Seen”, Says Kane Williamson

New Zealand captain Kane Williamson was effusive in praise of India batter Suryakumar Yadav’s incredible century - his second in T20I and both have come this year - on Sunday at the Bay Oval which helped India register a thumping win by 65 runs to take a 1-0 lead in the series with one match to go after the first T20I was washed out.

Suryakumar, who had hit a century in England earlier in the year and was similarly sensational in the T20 WC in Australia, clobbered 111 unbeaten runs in 51 balls while clattering 11 fours and 7 eye-catching sixes to the delight of the crowd in Mount Maunganui and in India who were wishing for some relief after the embarrassing T20 World Cup semi-final exit.

It was largely a one-sided Indian inning once Suryakumar entered to bat in the 6th over after the fall of the first wicket. India posted a total of 191, which also included 11 extras, out of which 111 were scored by Suryakumar Yadav alone; the rest of the batters scored 69 runs off 69 balls.

New Zealand batters too struggled on the pitch and were bowled out for 126, with skipper Kane Williamson scoring 61 runs off 52 balls, and is being criticized for his slow knock and poor strike rate. 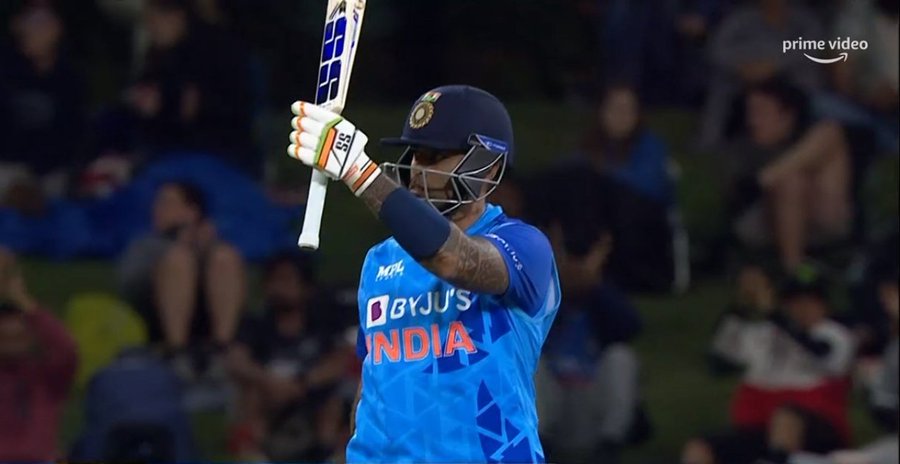 Surya is the best player in the world: Williamson

Kane Williamson hailed Suryakumar Yadav’s terrific knock as one of the best he’s seen in the format, and labeled the 32-year-old as the “best player in the world” currently.

“It was not our best effort. Surya’s innings was out of this world. One of the best knocks I’ve ever seen. Some of those shots, I’ve never seen before,” Williamson said at the post-match presentation.

“It did swing a bit (in the chase) and India did well to get some swing. Important to look at those few areas and improve. Need to look at the small margins. Sometimes, a special innings can happen, Surya is the best player in the world,” the Kiwi captain added.

The third and last T20I will be played on Tuesday at the McLean Park in Napier.