India clinched the 3-T20I series against New Zealand in New Zealand by the score line 1-0 after the third T20I on Tuesday in Napier ended in a tie after DLS had to intervene owing to the rain that stopped the play in India's chase at the 9-over mark. The game couldn't be continued and since India's score for that moment of 75/4 was exact as to the DLS target after 9 overs with 4 wickets down, the game was declared as tied.

The first T20I in Wellington was washed out completely while India won the second T20I in Mount Maunganui by 65 runs courtesty of a blistering century by Suryakumar Yadav. 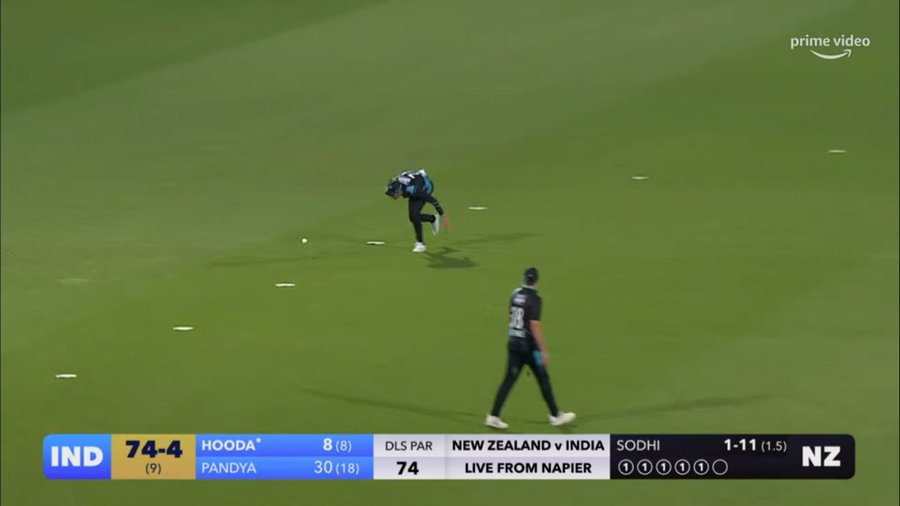 While the third T20I ended in a tie (DLS), Mitchell Santner was left to rue his fielding mistake on the last ball before the game was stopped. On the last ball of the 9th over of India's innings, Deepak Hooda sliced a short and wide delivery from spinner Ish Sodhi straight to backward point where Santner misfielded and Hooda and Hardik Pandya ran a quick single.

The rain arrived after that, and the match was called off as a tie. This means that had Santner not misfielded on the last ball before the rain arrived, India's score would have been 74/4 and New Zealand would have won the match by 1 run, and the series would have ended in a 1-1 draw instead of a 1-0 win to India.

Mitchell Santner, while speaking to the host broadcaster after the game, also acknowledged his mistake with a sheepish look: "By picking Iyer ahead of Samson the Indian think tank has reiterated that they’ll not learn from their mistakes and they shall never change their approach towards T20."