His first after 9 seasons as not RCB’s captain, it seemed something different when Virat Kohli came to bat against Punjab Kings on Sunday evening at the DY Patil Stadium for RCB’s first game of IPL 2022. Virat Kohli straightaway showed that he’s a man free of any burden, the pressure of captaincy when early …

His first after 9 seasons as not RCB’s captain, it seemed something different when Virat Kohli came to bat against Punjab Kings on Sunday evening at the DY Patil Stadium for RCB’s first game of IPL 2022.

Virat Kohli straightaway showed that he’s a man free of any burden, the pressure of captaincy when early on in his innings, he danced down to Harpreet Brar, the left-arm orthodox who had a superior match-up against right-handed Kohli and had dismissed him last season, and deposited the spinner down the ground for a six.

As much as this shot was a statement of intent from Virat Kohli, it felt it was also an almost needed stroke as skipper Faf du Plessis was struggling to middle the ball properly at the other end.

Brar and Rahul Chahar though put a tight leash on Faf Du Plessis and Kohli. The pair then, unable to hit the spinners, kept the scoreboard ticking with singles and rapidly ran twos. 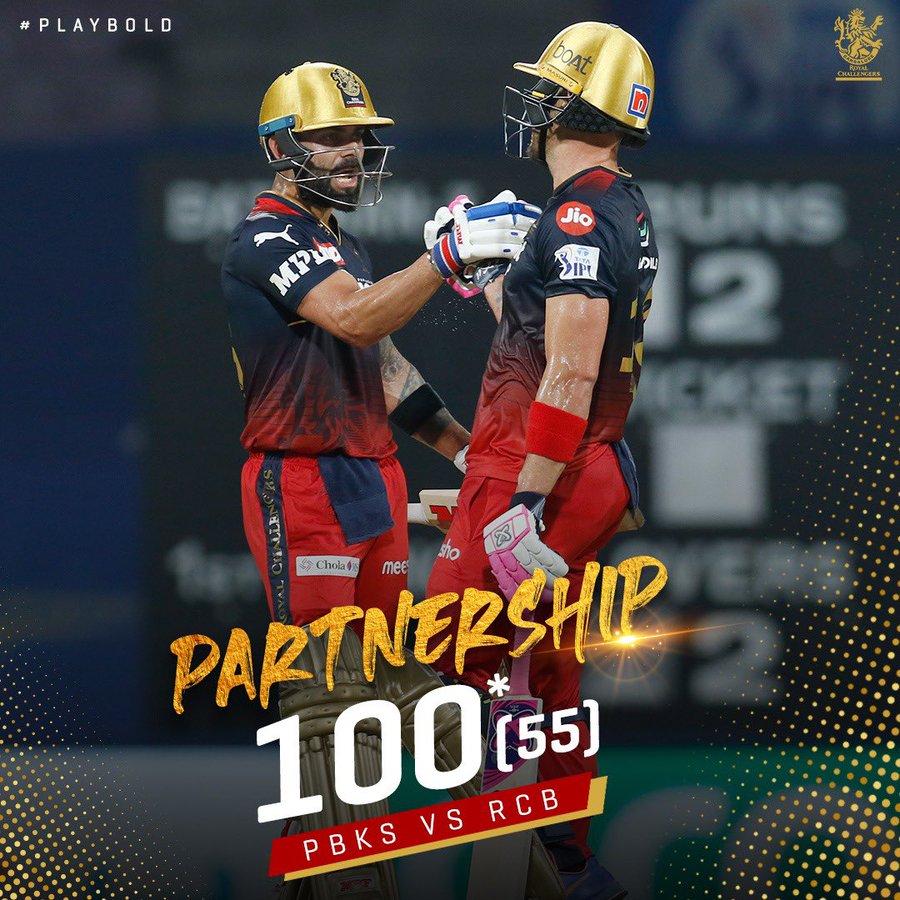 Du Plessis needed something to break his shackles, and in came Odean Smith for that. although it was Kohli who started the rampage against the West Indian with a boundary on the first ball before the South African smoked him for two sixes.

Faf and Kohli hammered Brar for three maximums and two more to Arshdeep before the left-hander had the RCB skipper holing out in the deep. That brought an end to a stunning stand between Kohli and du Plessis of 118 runs from 61 balls.

Kohli then was rendered mere a bystander at the non-striker’s end as Dinesh Karthik added a glorious finishing touch with his thunderous knock of 32 runs off 14 balls, Kohli remaining unbeaten on 41 off 29 balls.

Kohli smacked two sixes and a four in his innings, and while he wasn’t able to launch the big hits, his hard running was once again conspicuous. Not a scratchy innings by any margin, the former RCB skipper will take the total of 205 most days which he helped build playing a second fiddle role.

Fans were delighted to see some jaw-dropping shots from ‘King’ Kohli’s bat and praised his and Faf’s mega-partnership:

A South African and partnership with Virat Kohli for RCB is never ending story.

Can take singles, can take doubles will build the innings and then destroy the whole bowling lineup of the opponent.? pic.twitter.com/rEHJFBnbo6

Watching Virat Kohli live in front of my eyes smashing two sixes to a spinner already is a Sunday I would love to have every week. #IPL2022

Virat Kohli becomes the first player to bat in 200 T20 innings for a single team in IPL.

Next highest is 171 innings by Suresh Raina for CSK.#IPL2022 #RCBvPBKS

Faf Du Plessis and Virat Kohli have scored 92 runs together from just 8 overs with 2 fours and 7 sixes. Absolute carnage by Faf and Virat.

This is the attitude needed kohli. He was avging great vs spin, sr sucked since he hesitated to attack them. He looks so fearless here.

That was some terrific batting by @faf1307 and @imVkohli , what a cameo by @DineshKarthik to get @RCBTweets to a massive total! Amazing batsmanship I don't see @PunjabKingsIPL chasing this down but never say never especially in cricket! #PBKSvRCB #PBKS #RCBvsPBKS

Faf and Kohli and their destructive partnership.. Makes ya feel like something real special is brewing at RCB hey? ?? #IPL2022 #PBKSvRCB pic.twitter.com/glY4mKR0VA