Well, it all happened off the second ball of Chris Jordan’s first over – the second of the match – when Rajapaksa tapped and ran. Jordan himself ran to fetch the ball and threw it towards MS Dhoni, who showed the immense presence of mind at that time and started running from his position. He was fact enough to dive and throw the ball to the stumps before he himself got collided with it

The dismissal was so accurate and clear that Rajapaksa had started walking back to the pavilion without even waiting for the decision of the umpire. Rajapaksa was dismissed for 9 (5) with the help of a six. 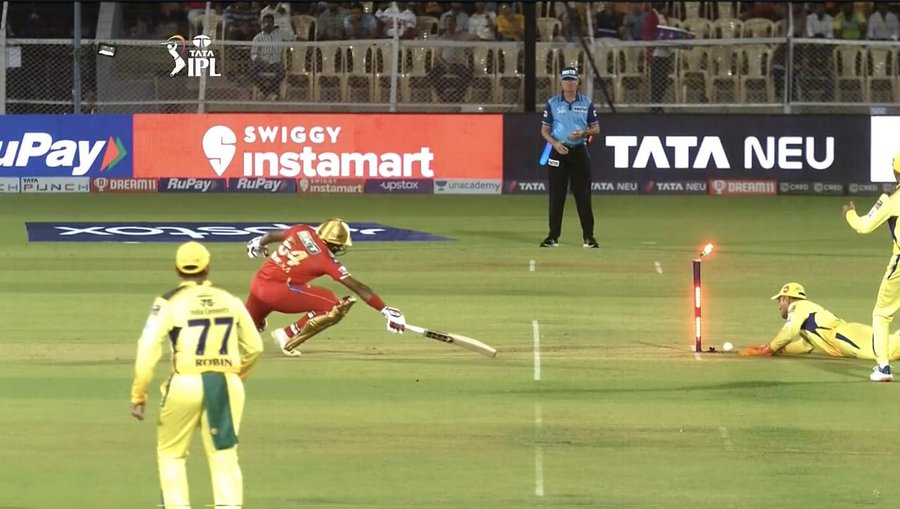 The lightning-fast run-out by MS Dhoni brought back memories of the 2016 T20 World Cup match between India and Bangladesh when Dhoni had dismissed Mustafizur Rahman.

It has to be noted that MS Dhoni, who is 41-years-old and hadn’t played international cricket since 2019. Before coming to IPL 2022, MS Dhoni was last seen playing in the previous season of IPL. With this sensational run-out, MSD displayed his age-proof fitness and presence of mind.

Meanwhile, a popular journalist on social media — Venkata Krishna B slammed the commentators and fans for going ‘a bit overboard’ while praising the efforts of MS Dhoni behind the stumps. He wrote:

“With all due respect to what Dhoni did, think most wicketkeepers would have done the same. The anticipation is what makes keepers who they are. The commentators are going a bit overboard IMHO.”

With all due respect to what Dhoni did, think most wicketkeepers would have done the same. The anticipation is what makes keepers who they are. The commentators are going a bit overboard IMHO.

Well, the tweet didn’t go down well with the fans of MS Dhoni, who are now trolling the journalist left, right, and center.

With all due respect to what you did, think most of self proclaimed journalists at 24-25 with tummy lurking outside have audacity to not recognise someone's extraordinary efforts at the age of nearly 41

Friendly reminder that he's 40 and doesn't play cricket for 9 months in a year. The appreciation is for his fitness and athletiscm to make the run and dive.

Do you realize is 40 years old man?

What's the problem if they praise him?

They are overboard due to fact that MSD is around 41 years old and he didn't play international cricket since 2019 and still he have that level of fitness and skill , it is really commendable and not cup of everyone's tea.

Most keepers aren't 42 yo and aren't out of cricket for the whole year. What most keepers have done once twice or for a few years MS has done for almost 15 years. Commentators are supposed to gi a bit overboard that's the kind of brand MS Dhoni is.