IPL 2022: Suryakumar Yadav Is Back And Mumbai Indians Fans Are Going Berserk

“I just wanted to spend some time in the middle, work the bowling around, play some 15-16 balls and then go after the bowling,” said Suryakumar Yadav after his brilliant knock of 52 runs from 36 balls helped Mumbai Indians put up a fighting total of 161 against Kolkata Knight Riders in Pune. What Yadav said …

“I just wanted to spend some time in the middle, work the bowling around, play some 15-16 balls and then go after the bowling,” said Suryakumar Yadav after his brilliant knock of 52 runs from 36 balls helped Mumbai Indians put up a fighting total of 161 against Kolkata Knight Riders in Pune. What Yadav said is what he did.

SKY was returning from an injury-forced month-long layoff that saw him miss MI’s first two games; well, his innings today once again asserted that MI missed him dearly in their losses in those matches.

However, Suryakumar Yadav would have hoped for a better welcome back in the eleven as he was put in a difficult situation straight away when he came in to bat at the score of 45/2 which turned 55/3 at the 11-over mark with Rohit Sharma and Ishan Kishan painfully struggling to middle the ball. 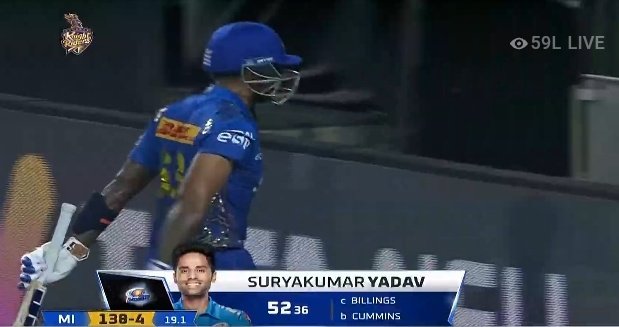 Despite the dire situation, there were no panic stations bowling off as Suryakumar, and Tilak Varma remained calm. Both of them decided to build a partnership. Yadav was 10 off 17 balls, before he broke his shackles: Umesh Yadav was lofted towards the deep mid-wicket boundary before a sumptuous upper-cut flew over third-man.

Then came out the Suryakumar special: sweeps – to pacer Rasikh Salam and mystery spinner Varun Chakravarthy. At the other end, Varma also smacked Chakravarthy and Cummins for a pair of four and six.

Then, SKY took on KKR’s best bowler, Sunil Narine, who has been close to unhittable this season. But, now, not against arguably the best batsman of spin in India. Suryakumar tonked Narine for a maximum over mid-wicket before cutting him late.

With another crisply placed boundary, off Russell, Yadav brought up his fifty off 34 balls and the MI dugout gave him a standing ovation. So did the Pune crowd. It was a terrific return from SKY, a much-needed one for Mumbai Indians who had struggled with the bat, especially in the middle and death overs in the last two games.

The MI fans remained abuzz with this sparkling fifty from Yadav that gave MI a chance to remain alive in the encounter.

Here are some of the best reaction on Twitter on Suryakumar’s thunderous half-century as he returns with a bang:

What a blitzkrieg by @KieronPollard55 ? @surya_14kumar and Tilak Varma help get @mipaltan to a respectable total. Can #MI defend this to register their first win of the season? #KKRvMI #IPL2022

A fine comes to an end, Suryakumar Yadav Scored brilliant 52 runs from 35 balls including 5 fours and 2 Sixes against KKR in tough situation for his team. Well played, Suryakumar Yadav. pic.twitter.com/ZRWGCDGCok

Excellent fifty by Suryakumar Yadav in 34 balls. A classic knock by Surya, he just returned after recovering from an injury and he puts on a show.

Also Read: IPL 2022: Here’s Why Rasikh Salam Was Banned By The BCCI For 2 Years