Two of the most popular types of woods which make modern cricket bats are English and Kashmir Willows. Willow is popularly known among the cricketers from the begging of their careers. These kind of woods majorly comes from the colder regions of Europe, Canada, Russia and in the northern most state of India, Kashmir. Willows have been derived from the willow plant of Salix alba, the bark of which is even used as a remedy for cold, fevers, and joint pains across cultures for thousands of years.

These are very fast growing trees which grows up to 60-80 feets. Professional cricketers use English willows mostly because of the high quality of bats and a bit more shine. Kashmir willows also produce some quality bats. Let us look at the major differences between them - 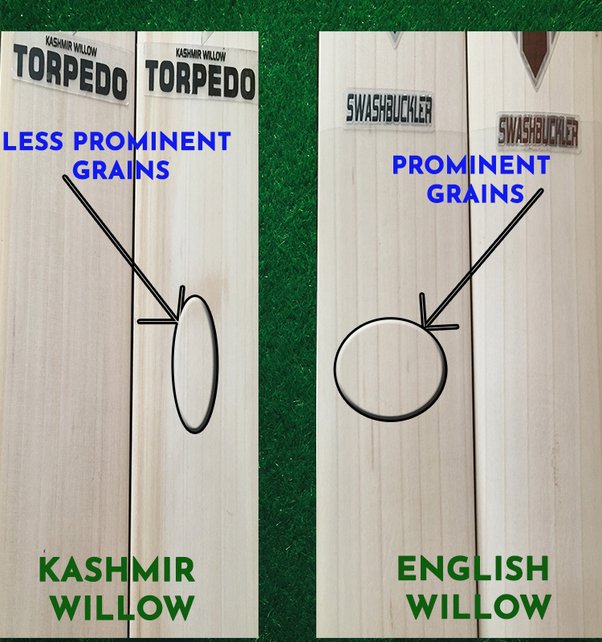 Colour basically comes from the nature of the soil and the weather. Kashmir willows are a bit dark shade than the English ones, which are a bit more white. This difference can help an expert easily understand the difference between the two. However, it does not work all the time, as not everyone can differentiate using this logic all the time.

It is a major part when it comes to buy a cricket bat. Grain is more visible and proper in high quality Willows, be it Kashmiri or English. Some of the high quality Kashmiri willows have better grains than low quality English ones.

Kashmir willows are generally heavier than the English ones. It is because of the higher density and moisture of the willow which makes it like that. English willows are lighter in weight. Any kind of high quality willow have that perfect balance that a cricketer finds in their bat. The fiber orientation of them is vertical while it’s the opposite, i.e. horizontal in Kashmir willows.

So which one to buy?

Keeping the price in mind, high quality Kashmir willows will be a bit cheaper than the English ones. At the start of the career, kids can buy them. They can use those till a certain point in time in their career. Once established, a player can easily switch to the latter and further enhance his or her game. English willows are lighter in weight and have a much better ping off the bat which makes the strokeplaying easier.