LED stumps were first introduced as early as 2013 in the Big Bash of Australia, and we're designed by Eckermann.

There was a time in cricket, where the moment a team emerged victorious in a major tournament game, or in the deciding match of a bilateral or tri-series, the members of the winning would immediately make a beeline towards the stumps on both sides of the pitch so that they can get their hands on a souvenir that will remind them of that triumph and keep it fresh in their minds and as well as hearts. MS Dhoni was a big fan of casually walking towards the stumps and picking out one of the wickets before walking away with minimal fuss.

However, it has been observed in the recent past that no one is allowed to take away any part of the stump, or even the bails for that matter. So what exactly has led to this drastic change of not allowing the players the privilege of taking a souvenir what they can rightly and deservingly call the spoils of victory?.

The answer is very simple: LED Stumps. In the modern world of cricket, the basic wooden stumps and bails have found themselves pushed back into the realms of irrelevance, making them nothing but a footnote in the constant evolution of the game.

In their place come the latest wonder of cricket, LED Stumps and bails that light up the moment there is any sort of contact on them. These wickets work on touch-sensitive technology, which is of massive help to the umpires as well as the third umpires to determine close calls when it comes to stumpings or run-outs.

These type of stumps were first introduced as early as 2013 in the Big Bash of Australia, and we're designed by Eckermann. Following the Big Bash, the ICC wasted no time in introducing them to the international stage as well, parading them to the world in the 2014 T20 World Cup in Bangladesh. And after getting an overwhelming majority of positive responses, the governing body decided that this was the way to go. 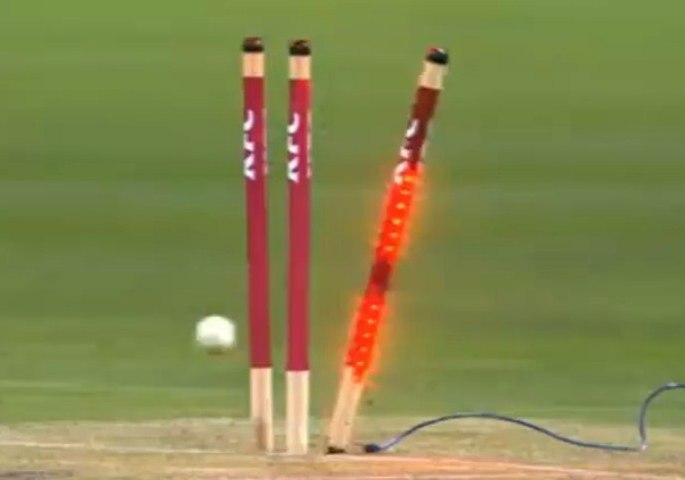 However, this invention comes at a price, and a rather hefty one at that, which might help in explaining why players are not allowed to take them for themselves. While the LED stumps themselves cost somewhere around $40,000 (ranging around 24 lakh INR), the bails will cost around 50,000 INR.

So if you put those prices together, that will get you a complete set of wickets at around 25 Lakh INR. So if you take into account that there are two sets of wickets, LED stups will cost around 50 Lakh INR per match. Factor in the number of matches in a series or during the course of a major tournament, that cost keeps on increasing. Hence the umpires are very particular in letting the players know well in advance that going towards the wickets and taking them for yourself is a big NO.

However, apart from the issue of taking the LED stumps away, the founder Eckermann is afraid of another factor - the stumps being shattered into two. With the modern game bearing witness to some of the most lethal fast bowlers around the world bowling toe-crushing Yorkers at 150+ kmph with consummate ease, Eckermann fears that the pace of those balls will be too much for the stumps to handle. While incidents of stumps breaking have been few and far in between, Eckermann only hopes that it doesn't happen too much. And for his sake, we hope the same as well.