Afghanistan concluded their T20 World Cup 2022 campaign without a win (lost 3 and 2 wash-outs), the only side to not win a single game, after which skipper Mohammad Nabi decided to step down as captain.

However, they gave an almighty scare to hosts Australia in Adelaide courtesy of a blistering late assault from Rashid Khan, who could have even led his side to perhaps what would have been the biggest upset of the tournament which has already been filled with some big upsets and surprised.

Chasing 167, Afghanistan looked done and dusted at 103/6 after a collapse from 99/2 to 103/6 and the talks were about what could be the margin of victory that Australia could register. Swiftly, though, the talks changed as Rashid Khan, playing at his adopted home ground - Rashid plays for the Adelaide Strikers in the BBL - started hitting the balls to the fence.

45 runs were required off 14 balls when Rashid, batting on 10*(11), cracked two sixes to Kane Richardson to finish the 18th over and keep Afghanistan in the hunt. He hit a six and a four in the next over, off Hazlewood.

In the last over, bowled by Stoinis, Rashid clattered a four followed by a six, leaving his side needing 11 runs off the last two balls to send the fans at the Adelaide Oval in raptures and everyone with their jaws dropped at the prospect of an unimaginable upset.

However, it was not to be today as Stoinis saved the day for Australia conceding 6 off the last two balls to win his side the game by only 4 runs. Rashid remained unbeaten on 48 runs off 23 balls (strike rate 208!). 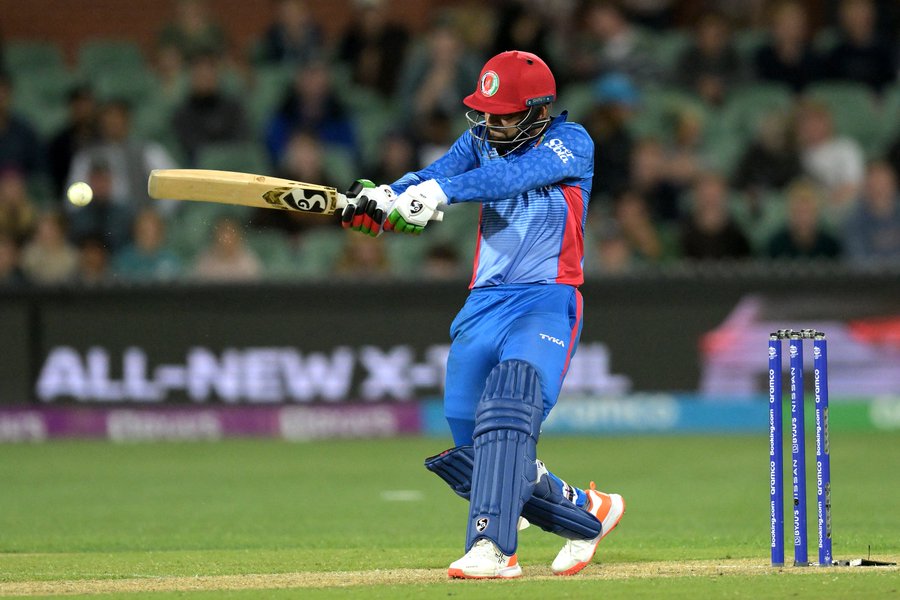 "Few better entertainers in our game than @rashidkhan_19," Harsha Bhogle wrote. This one-line tweet praise for Rashid from Bhogle has gone viral.

Few better entertainers in our game than @rashidkhan_19.

Meanwhile, New Zealand became the first team to qualify for the semi-final. Australia need Sri Lanka to defeat England otherwise should England win, they will go through to the semis as they have better NRR than Australia.

In Group 2, only Netherlands have been eliminated, the rest of 5 teams are alive in the semi-final race.